Robots are replacing humans; within a decade 25% of manufacturing jobs will be automated 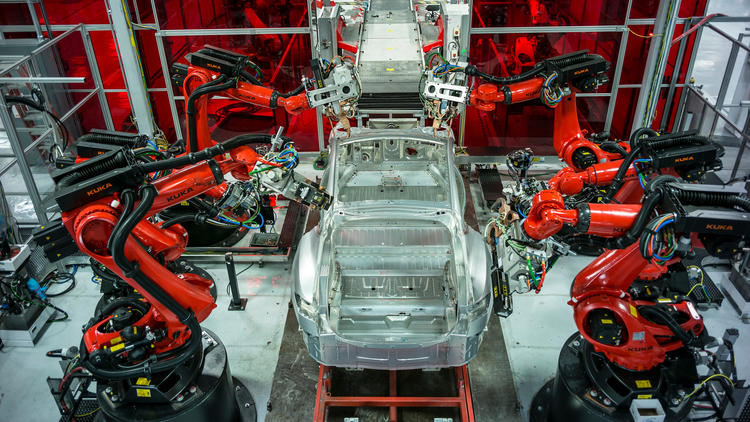 Robots are replacing humans in manufacturing jobs—a staple of rural areas—at a much higher rate than previously thought, says a study by the Boston Consulting Group, Paul Davidson reports for USA Today. The main reason is that machines are cheaper. The cost to purchase a robotic spot welder ranged from $182,000 in 2005 to $133,000 to 2014, to an estimated $105,000 by 2025. Robots cost about 15 percent less than humans. For example, in electronics manufacturing a robot costs $4 an hour, compared to paying a human about $24 per hour. (Los Angeles Times photo by David Butow: Robots in a factory in Fremont, Calif.)

The study says that "within two years, the number of advanced industrial robots in the U.S. will begin to grow by 10 percent a year, up from current annual growth of 2 percent to 3 percent," Davidson writes. Within a decade 25 percent of all manufacturing functions will be automated, up from the current number of 10 percent. "About 1.2 million additional advanced robots are expected to be deployed in the U.S. by 2025," used mostly in four areas: computer and electronics products; electrical equipment and appliances; transportation; and machinery.

RBC Global Asset Management said in a separate report that "robots can be reprogrammed far faster and more efficiently than humans can be retrained when products are updated or replaced—a crucial advantage at a time when smartphones and other products quickly fade into obsolescence," reports The Associated Press. "Increasing automation is likely to change the way companies evaluate where to open and expand factories," leading factories to employ fewer people that are likely to be highly skilled.
Written by Tim Mandell Posted at 2/10/2015 01:28:00 PM