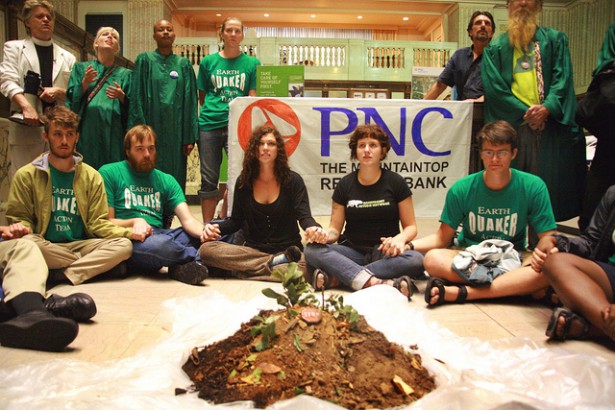 Mounting pressure from the organization Earth Quaker Action Team (EQAT) forced PNC Bank earlier this month to announce it was substantially cutting financing for companies that practice mountaintop removal. How did EQAT get the nation's seventh largest bank to cave to an issue it had for years refused to respond to? George Lakey, an activist, Quaker and visiting professor at Swarthmore College, explains EQAT's success in an article for Waging Nonviolence. (Flickr photo by Brennan Cavanaugh)

"EQAT began as a tiny group, protesting in PNC bank branches and PNC-sponsored community events," Lakey writes. "We marched 200 miles across Pennsylvania to PNC’s headquarters in Pittsburgh. We learned to hold pray-ins, get arrested and disrupt shareholders meetings. We inspired people to pull over $3.5 million out of PNC bank deposits. In December, EQAT pulled off 31 actions in 12 states and Washington, D.C., within 24 hours. It became clear to PNC that EQAT was growing and would never go away until the bank changed."

"The group made a number of decisions along the way that attracted criticism, even from some who agreed with EQAT that global warming is a threat," Lakey writes. "One was to focus on a bank instead of political authorities. The Environmental Protection Agency and politicians are the legitimate deciders on environmental policy, we were told. Why target a bank that is only doing its job? We chose our target believing everyone needs to take responsibility for their role in the unfolding disaster of climate change, including banks whose financial decisions have enormous consequences compared with most individuals and groups."

"A Princeton University study released in 2014 gave support for our choice to target the economic elite." Lakey writes. "The study found major policy decisions in the United States don’t result from the normal political processes but from the economic elite telling politicians what to do. Billionaire Warren Buffett earlier put it more pungently to The New York Times when he said, 'There’s class warfare, all right, but it’s my class, the rich class, that’s making war, and we’re winning.' EQAT recognized that many Americans are in denial about the class warfare raging around them. Targeting a bank, we though, might help people smell the coffee." (Read more)
Written by Tim Mandell Posted at 3/23/2015 01:58:00 PM