Bison farms, growing in popularity, provide a healthier alternative to other meats 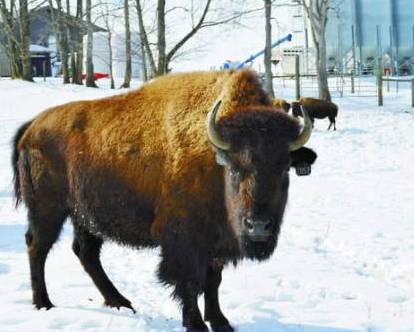 More than 162,000 bison live on 2,564 private ranches and farms in the U.S., according to the 2012 U.S. Department of Agriculture census, says the National Bison Association. Once in danger of extinction, the species is now flourishing, with more than 500,000 in North America. And people have taken notice that bison meat, although more expensive, is a healthy alternative, with fat and calorie intakes considerably lower than other meats. It's not uncommon to find bison meat in restaurants or in the meat department of grocery stores. This is good news for farmers and ranchers raising bison. (Farmer's Pride photo by Tiffany Kessler: Bison in Oldham County, Kentucky)

One such farm is in Oldham County, Kentucky, near Louisville. The 150-year-old, 1000-acre farm is one of only 10 in the state to raise bison, Tiffany Kessler reports for The Farmer's Pride. The farm's 300 bison recently switched to being grass-fed, which is cheaper than hay and is in line with consumer demands for the animals that grow to weigh between 900 and 1,100 pounds.

Despite the fact that bison are healthier, farm manager Kristopher Kelley said many restaurants weren't even interested in samples, Kessler writes. Kelley told her, "We had to do a big push on marketing. We spent a lot time with local chefs, showing them the health benefits of bison and the different ways it can be used in cooking. We had a lot of success with that. Now if bison is on the menu in Louisville, it’s generally ours.” (Read more)
Written by Tim Mandell Posted at 3/25/2015 02:50:00 PM