The Oklahoma Corporation Commission announced on Wednesday plans to expand scrutiny of disposal wells that could be linked to earthquakes to include wells within six miles of an earthquake swarm, Mike Soraghan reports for EnergyWire. OCC "defines a swarm as two earthquakes within a quarter-mile of each other if one of the quakes is magnitude 3 or greater. That will put another 350 wells that inject into the Arbuckle formation under that extra scrutiny."

Oklahoma led the lower 48 states in earthquakes with 585 of magnitude 3 or higher in 2014, more than the state had in the previous 35 years combined. Officials have been slow to publicly link oil and gas operations to earthquakes and have faced industry pressure to quiet scientists who speak out about such links.

Companies that own wells within earthquake swarms "will also have to demonstrate to the agency that they are not injecting in, or too close to, the granite bedrock zone known as the 'basement,'" Soraghan writes. (Oklahoma Geological Survey map) 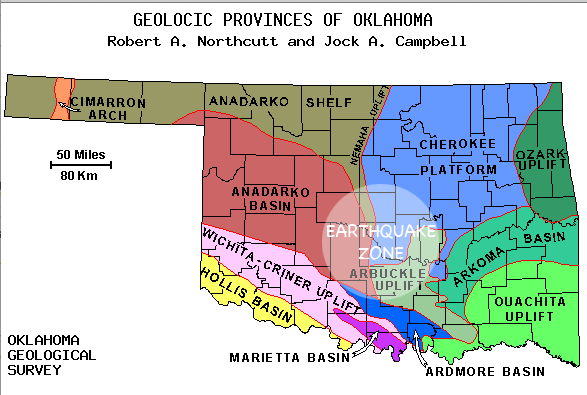 Despite mounting scientific evidence linking disposal wells to earthquakes, many people, including Republican Gov. Mary Fallin, are not convinced the link exists, Soraghan writes in a separate story. "State Insurance Commissioner John Doak has warned insurance companies against denying claims based on the 'unsupported belief' that Oklahoma quakes are man-made. And the state's richest oilman, Continental Resources Inc. founder Harold Hamm, has said of quake activity, 'It's certainly not related to oil and gas activity.'"
Written by Tim Mandell Posted at 3/26/2015 04:55:00 PM