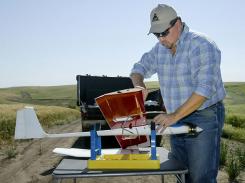 Federal Aviation Administration regulations on unmanned aerial vehicles will play a large part on how drones are used in agriculture and whether or not it will be worth it to use the devices, Jim Patrico reports for DTN The Progressive Farmer. "The agency has struggled to formulate regulations for an industry that has expanded exponentially over the last years. Indications are that FAA finally will post rules for commercial UAV operators this summer." In December, FAA said that recreational drone users would have to register their aircraft with the government, but the agency has continually delayed releasing regulations. (Wheat farmer and UAV expert Robert Blair sets up a plane for flight.)

"It's clear to observers that commercial users can expect more stringent rules," Patrico writes. "Some in the industry forecast that commercial UAV operators—including farmers—would have to undergo training and be licensed. The first set of regulations will be for those who use UAVs only for taking photos and videos, insiders speculate. Later regulations will cover other UAV application—spraying crops, for instance. These are likely to be tight and require yet more training."

"Some companies and individuals already have FAA Section 333 exemptions, which allow them to fly UAVs for some commercial purposes," Patrico writes. "But along with exemptions comes bookwork. Anyone with an exemption has to file a Notice to Airmen (NOTAM) with the FAA at least 72 hours before a flight. The NOTAM must specify when, where and why the UAV will fly. If for some reason the flight does not happen when planned—say the weather doesn't cooperate—a new NOTAM is required."

Robert Blair, an Idaho farmer who has been a pioneer in UAV applications for agriculture "questioned whether many farmers really would be able to justify the personal time and effort necessary to get the most benefit from UAV technology," Patrico writes. Blair said farmers would likely have to hire someone to implement drone technology, mostly because they wouldn't have the know-how or time to work with the vehicles.

He also said having a drone can be expensive, Patrico writes. "Blair said, farmers should expect to pay $20,000 or more for a vehicle, sensors and software. He expects fixed-wing configurations will be the choice of professionals because they can carry a bigger payload and can stay aloft longer" to cover ground at a quicker pace. (Read more)
Written by Tim Mandell Posted at 2/01/2016 01:43:00 PM