While most states enjoyed a strong economic finish to 2015, a study by the Federal Reserve Bank of Philadelphia found that seven states—North Dakota, Wyoming, Wisconsin, Illinois, Mississippi, Louisiana and Alaska—are doing a little worse than everyone else, Ana Swanson reports for The Washington Post. The state coincident index, "which measures things like employment, hours worked in manufacturing and the unemployment rate to create an estimate of how economic growth has changed for each state over the past three months," found that in those seven states the economy is shrinking.

Historically low oil prices have affected the economies of North Dakota, Wyoming, Alaska, Mississippi and Louisiana, Swanson writes. "The price of a barrel of Brent crude has fallen from over $100 in mid-2015 to less than $35 today." Fiscal issues and sluggish performance of some manufacturing industries has hurt Wisconsin and Illinois.

While those seven states have struggled, 41 states have seen their economies grow, Swanson writes. "The states with the strongest growth—over 1 percent in the three-month period, according to the estimates—include Oregon, Idaho, Arizona, Colorado, Kansas, Georgia, West Virginia, New Jersey and Maine. Michigan and Oklahoma weren't faring too well either at the end of 2015—the Philadelphia Fed's data shows that their economic growth was unchanged from three months before." (Federal Reserve Bank of Philadelphia map) 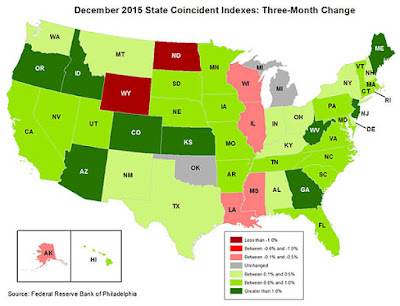