U.S. farmers and ranchers are more likely to support a Republican presidential candidate and favor businessman Donald Trump as their top choice, according to the 2016 Producer Survey Results by Aimpoint Research consultants in collaboration with Agri-Pulse Communications, Inc. and the American Farm Bureau Federation. The survey, which consisted of 750 phone interviews of producers with more than 200 acres of farmland, was made up of 70 percent Republican leaning respondents, 19 percent Democratic and the remainder independent. The majority of respondents—83 percent—were male, 41 percent were 65 and older and 68 percent were 55 and older. 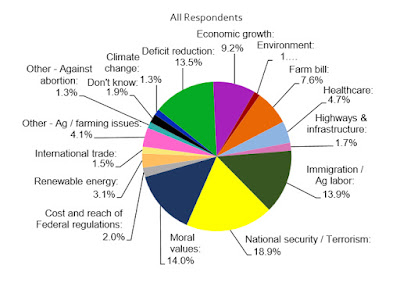 Also, 18.9 percent of respondents said national security/terrorism is the most important issue facing the country, choosing that over immigration/ag labor (13.9 percent), economic growth (9.2), the farm bill (7.6), healthcare (4.7), other ag/farming issues (4.1) and renewable energy (3.1).

Sara Wyant, Agri-Pulse editor and founder, told the publication: “It's clear that GOP-leaning voters are very dissatisfied with the direction of the country, the way President Obama is doing his job and the way that Congress is doing its job. And there was not much variance by age or farm size, although a higher percentage of younger voters expressed dissatisfaction with how Congress is functioning. They want to elect someone who can make major changes.”

Tim Marema of the Daily Yonder points out that two-thirds of U.S. farmers have less than 200 acres in production: "Larger operators have some unifying characteristics that set them apart from the rest of farmers and ranchers, let alone the rest of rural America and the nation overall. In short, they are a bloc with a unified set of interests and a common political persuasion. . . . Don't mistake it for representing rural opinion."
Written by Tim Mandell Posted at 2/01/2016 01:43:00 PM