The Senate Committee on Indian Affairs heard Wednesday that Indian Health Service hospitals that serve the Plains Indians in the Dakotas Nebraska and Iowa have more than "250 vacancies for healthcare professionals and a physician vacancy rate of 37 percent," David Rogers reports for Politico. "Despite promised reforms, three Indian Health Service hospitals in the four-state region are listed as seriously deficient by inspectors from the Centers for Medicare and Medicaid Services—leading to the sudden pre-Christmas closing of a critical emergency room facility in South Dakota."

The hearing "followed on a Republican-led staff investigation begun last summer amid new complaints from tribal members," Rogers writes. Chairman John Barrasso (R-Wyo.), a surgeon, said, “What we found is simply horrifying and unacceptable. In my view the information provided to this committee and witnessed first-hand can be summed up in one word: malpractice.” (U.S. Health and Human Services Department map) 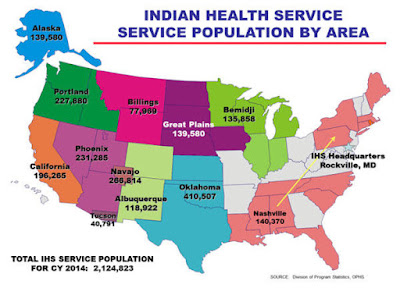 One problem is that "the same Senate panel had hit hard on the very same issue in 2010, when Democrats controlled the chamber," Rogers writes. "Barrasso invited back former Sen. Byron Dorgan (D-N.D.), who led the 2010 investigation, as his lead witness. Dorgan said the agency is seriously underfunded by about half but also suffers from a 'split personality' that undercuts its ability to be effective." He said, “There are some really great people, people who care, who signed up and commit their lives to the Indian Health Service to deliver good health care. And then I see something else. I see the weaving of friendships and favors, relatives, incompetence, corruption and yes, even criminal behavior. And it has all too often—and continues to be in my judgment—been overlooked, excused and denied. And that cannot continue.”

Another problem is that the tribes in the rural, isolated Great Plains "are among the poorest in the nation and so more vulnerable to health problems," making it hard to attract medical professionals to the area, Rogers writes.
Written by Tim Mandell Posted at 2/04/2016 10:24:00 AM