Julianne Couch, an author who has written about the rural Midwest, decided to attend her first presidential caucus to find out exactly how a caucus works. Couch, a Hillary Clinton supporter, participated in the Democratic caucus in rural Jackson County, Iowa, writing about her experience for the Daily Yonder.

"Caucusing always sounded like a strange way to spend a Monday night in February," Couch writes. "Especially the way the Democrats do it in Iowa. You mean you want me to go and literally stand under a sign with my candidate’s name on it and be counted? You mean if the person whose name I stand under isn’t viable enough to earn a delegate, I’ll be worked over until I go stand under the sign of a more popular candidate? I was nervous."

"The first order of the voting portion of the evening was for each group to count itself," Couch writes. "Our Hillary for Iowa coordinator was a young man from Connecticut who’d deployed to Jackson County last spring. He had us all raise our hands and as he counted aloud, and once we were counted, we lowered our hands. Team Bernie did something similar though they did not have an official campaign organizer present. After the first count, Hillary had 72 supporters and Bernie had 66. As I recall, there were two undecided and four for (Martin) O’Malley, not close to the 21 he needed to be viable." (CNN map; To view an interactive version click here) 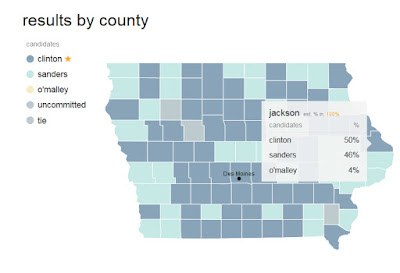 "That meant it was time for the realignment process," she writes. "This is something that does not happen in the Iowa Republican caucus format in which secret ballots are cast. To start the process, three individuals approached the mic in turn, and spoke briefly for their candidate. The man who spoke for Bernie knew both the candidate and his wife, and judged them to be excellent and worthy, smart and caring. The second man spoke for Hillary and explained that when his wife had cancer, they were grateful for affordable health care and they didn’t want 'Obamacare' to be dismantled. The third man said he supported O’Malley because O’Malley understood that we are a nation of immigrants and was not 'angry.' When that speaker said that as a Democrat he’d support any of the three, that was the applause line of the night."

"After those public affirmations it was time for the O’Malley supporters and undecideds to realign," she writes. "As Preferences Captain, it was my job to be sure none of the Hillary supporters drifted away to Bernie’s end of the bleachers. I thought of myself as the border collie, keeping everyone rounded up. On the other hand, it was the Persuasion Captain’s job to be the bulldog, I’d assumed, although it was not bullying that took place. Folks just moseyed over to the undecided/unviable area and visited. The woman member of the undecided couple soon strode past the Hillary area straight to the Bernie section, where she was greeted with cheers. Then a few O’Malley supporters drifted to the Hillary area, and we cheered. This took as long as it took, until everyone picked themselves a team."

"After realignment, another round of `counting revealed that Hillary had 76 supporters, and Bernie 68," she writes. "But it was then time for 'caucus math' which precludes delegates being split in half but has no problem rounding them up or down. In the end, after a caucus process that took a little more than an hour, the top two candidates were declared to have tied. Each will have four of our precinct’s eight delegates at the county convention in March."
Written by Tim Mandell Posted at 2/04/2016 11:09:00 AM