Asian carp would hurt Lake Erie than any other Great Lake, and they may have a way to get there

A study published in the journal of the American Fisheries Society found that if Asian carp invaded Lake Erie they "would disrupt the food web and decimate native species like walleye," Kevin Duffy reports for the Great Lakes Echo, a project of the journalism department at Michigan State University. "Invasive silver and bighead carp are already abundant in nearby Great Lakes watersheds. They devour microscopic plants called phytoplankton and animals called zooplankton, the first food of popular fish like walleye and Chinook salmon."

While a $300 million dollar federal effort has kept invasive carp out of the Great Lakes, it appears stymied. Almost all the effort has focused in canals in and near Chicago, but researchers also worry that during floods carp could cross a marshy divide between the Lake Erie watershed and the Wabash River, part of the Mississippi River watershed, where Asian carp have been found, Duffy reports. (To view a larger version of the map below, click on it) 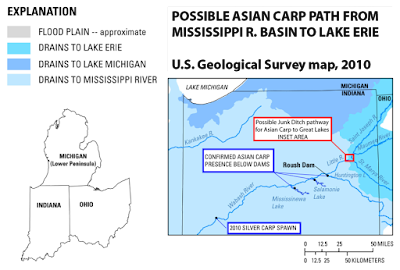 If the species enter the lake, “One-third of Lake Erie’s total biomass would be Asian carp,” Duffy reports, noting that the lake is the shallowest of the Great Lakes and "also the most productive, meaning a constant influx of nutrients like phosphorous promote plankton growth—and harmful algal blooms." That means Asian carp would likely be more abundant in Lake Erie than in any other of the Great Lakes and "even during a massive algal bloom, silver carp would thrive, targeting and feeding on surface water algae but not suppressing it," said fisheries biologist and co-author Ed Rutherford.

Rutherford said "silver and bighead carp would wreak havoc on the current ecosystem," Duffy writes. Invasive carp could reach 34 percent of the total fish weight, twice the size as gizzard shad, the lake's most common plankton-eating fish. Asian carp would lead to sharp declines in shad and other fish that eat zooplankton and algae "as the carp ate up much of their food. ­And the impact cascades. These fish, including alewife and shiner, are important food for gamefish like walleye and perch. The model suggests carp could force more than a 10-percent decline in walleye and as much as a 15-percent decline in burbot and rainbow trout."
Written by Al Cross Posted at 2/02/2016 11:43:00 AM