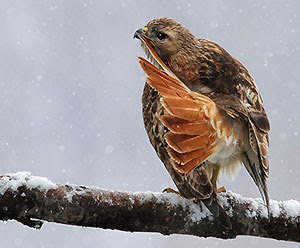 The annual Great Backyard Bird Count is scheduled from Feb. 12-15. Created in 1998 by the ornthology lab at Cornell University in upstate New York and the National Audubon Society, the event asks people to take 15 minutes on one or more days to count birds from any location and create a checklist of the birds they spot. Last year more than 147,000 checklists were created from more than 100 countries, consisting of 5,090 species of birds. Participants are also encouraged to download photos of birds to the GBBC website. There is also a photo contest. (2015 GBBC photo of a red-tailed hawk, taken by Peter Ferguson)

The event can also serve scientific purposes, says its website. It "will help scientists track changes in bird distribution, some of which may be traced to El Niño storms and unusual weather patterns." Marshall Iliff, of the Cornell Lab of Ornithology, said: "The most recent big El Niño took place during the winter of 1997-98. The GBBC was launched in February 1998 and was pretty small at first. This will be the first time we’ll have tens of thousands of people doing the count during a whopper El Niño.”
Written by Tim Mandell Posted at 2/05/2016 12:02:00 PM