Many Walmart closings are in poor, rural areas; reporter examines impact on one Appalachian town 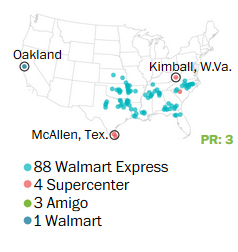 Walmart's announcement last month that it will close 154 stores will have the greatest impact on poor rural areas, Tim Meko and Lydia DePillis report for The Washington Post. Of the 154 stores closing 96 are in low-income, low-density and predominately rural areas, mostly in the Southeast. Of those 96 stores, 88 are Walmart Express stores, which were created as "part of a pilot program intended to compete with dollar stores." (Post map: Stores closing in mainly low-income, low-density rural areas)

Losing a Walmart could be lethal for some towns that are barely holding on, DePillis writes in another story for the Post. Residents of Kimball, W.Va., which is already reeling from the loss of mining jobs, fear that losing its Walmart could be the end of the town. "In Raymondville, Texas, the disappearance of tax income from Walmart could force city layoffs. In Oriental, N.C. the arrival of a Walmart Express had been the final straw for a local grocery store, leaving the community with few options for food—also the case in Juneau, Alaska; Fairfield, Ala.; and Winnsboro, S.C."

While Walmart officials cite financial performance as the primary factor in closing stores, an analysis by the Institute for Local Self-Reliance found that 89 percent of stores to be closed are "in states with higher-than-average square footage per capita. According to Walmart itself, 95 percent of the closures are within 10 miles of another Walmart." That suggests the company overbuilt, perhaps in areas that have stagnant or declining population.

Walmart, the largest private employer in West Virginia, in 2005 transformed a former K-mart in Kimball (Best Places map) into a Walmart "to fill a gap between two other towns both about an hour’s drive away," DePillis writes. "It did so — but in January the massive retailer announced its 'sharpened focus on portfolio management' and the revenue in Kimball wasn’t quite enough to sustain the location, according to McDowell County Commission chairman Harold McBride."

"The company didn’t get what it wanted in profits," DePillis reports. "But the store certainly met many needs of the community. Some are obvious: A second option for shoppers who wanted fresh, affordable food in a place with only one other full-service grocer. And jobs—140 of them that will be difficult to replace. But Walmart’s disappearance will have more subtle ripple effects, like a drop in traffic to the small neighboring hotel and gas station, and the loss of a place to buy phone cards and hire tax preparation help. It was the main donor to the local food bank, and contributed $65,000 annually in taxes to the county, most of which goes to the school district."
Written by Tim Mandell Posted at 2/05/2016 12:20:00 PM

Another feature from the paper in Springfield, Missouri