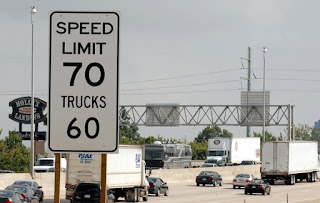 Speed limits on Michigan's 600 miles of rural highways could soon be raised to 75 or 80 mph, Emily Lawler reports for MLive Media Group. The House Transportation and Infrastructure Committee on Tuesday approved a package that includes raising speed limits to 75 mph on most rural highways and eventually raising limits to 80 mph on ones where it's deemed feasible and safe. (MLive photo: Current speed limits in Michigan)

The bill's sponsor, Rep. Bradford Jacobsen (R-Oxford), who sponsored a similar package in 2014, told Lawler, "Most expressways are designed for 5 over, if you would, so they're designed at 75 miles per hour. ... While this legislation specifically calls for raising speed limits on certain freeways to 75 mph, we included provisions that also allows for the studying of raising the speed limit to 80 mph in the future."

Critics say raising speed limits on rural roads is dangerous for pedestrians and cyclists, Lawler writes. Nancy Krupiarz, executive director of the Michigan Trails and Greenways Alliance, "said many of these rural roads in context are carrying pedestrians and bicyclists and sometimes connecting them to trails." Krupiarz told Lawler, "People can come flying over these hills and around these curves and it could be a very perilous journey." (Read more)
Written by Tim Mandell Posted at 2/03/2016 12:36:00 PM