Okla. schools post signs: staff are armed and will use 'whatever force is necessary' to save students 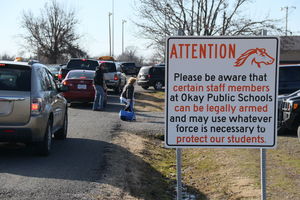 A rural school district in Oklahoma this week posted four signs with the warning “Please be aware that certain staff members at Okay Public Schools can be legally armed and may use whatever force is necessary to protect our students,” Rhett Morgan reports for the Tulsa World. Superintendent Charles McMahan told Morgan, "Having a sign in your front yard saying ‘this is a gun-free zone’ just tells the idiots, 'come on in,' because we can’t defend ourselves. (Okay’s) sign might be enough to send somebody down the road looking for some other soft target. If that’s what it does, it’s helping our school district out.” The school district, which has about 500 students in K-12, is located about 50 miles east of Tulsa. (Muskogee Phoenix photo by Harrison Grimwood)

An Oklahoma bill was signed into law in May that "created the Special Reserve School Resource Officer Act, allowing certain people to carry handguns on public school property," Morgan writes. In August, Okay's school board approved a policy that "states that administrators who meet criteria set out by the state and school board may bring to campus a gun concealed on their person or kept in a locked box."

Okay is located about seven miles from Fort Gibson, where a 1999 middle-school shooting resulted in five students being wounded, Harrison Grimwood notes for the Muskogee Phoenix. "According to Everytown for Gun Safety Support Fund, a gun violence research group, there were about 65 school shootings—some with injuries, some without, some intentional, some unintentional—in 2015."
Written by Tim Mandell Posted at 2/04/2016 12:22:00 PM