President Obama's decision on Wednesday to renew diplomatic relations with Cuba could be huge for U.S. agriculture, especially in Southeastern states, as long as the Republican Congress doesn't block funding for an embassy and ambassadors.

Agriculture Secretary Tom Vilsack applauded the decision, saying in a statement that it "expands opportunity for U.S. farmers and ranchers to do business in Cuba. It removes technical barriers between U.S. and Cuban companies and creates a more efficient, less burdensome opportunity for Cuba to buy U.S. agricultural products. It also makes those products far more price competitive, which will expand choices for Cuban shoppers at the grocery store and create a new customer base for America's farmers and ranchers." 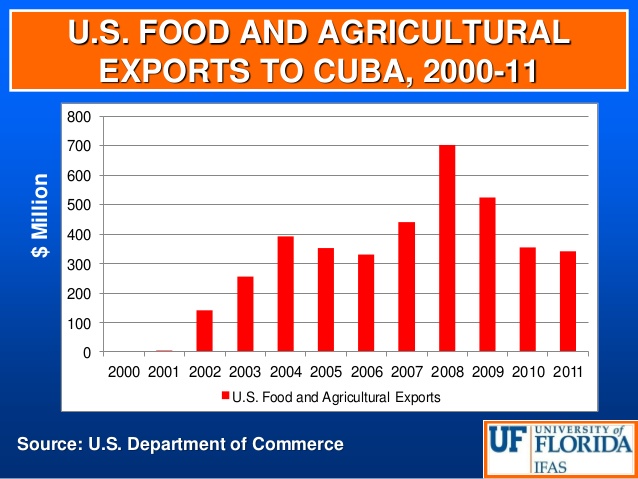 The U.S. has allowed agricultural exports to Cuba since 2001, but exports have drastically fluctuated on a yearly basis, from a low of $4.1 million in 2001 to a high of $710 million in 2008, Doug Palmer, Helena Bottemiller Evich and Jenny Hopkinson report for Politico. Trade has been largely limited by financial and regulatory hurdles that the Obama Administration is working to eliminate. (University of Florida graphic)

"In 2013, the U.S. exported just shy of $350 million of agricultural goods to Cuba, with frozen chicken, corn, soybeans and soybean meal, as the top products, according to the U.S.-Cuba Trade and Economic Council. Chicken represented nearly half the value, with $144 million in sales," Politco reports. "Canned foods, frozen sausages and frozen pork were also among the top 10 products."

Southeastern states are in position to reap the rewards of the reforms because they are able to "easily ship products like poultry, rice and corn to Cuba, which is just a few hundred miles away," Politico reports. "As of 2006, a full quarter of Alabama’s agricultural revenue came from exports to Cuba, including sales of catfish, soybeans and poultry. Other leading states exporting to Cuba include Georgia, Arkansas, Texas, North Carolina and Mississippi, with most products funneling through Louisiana, Florida or Virginia ports." (Read more)
Written by Tim Mandell Posted at 12/18/2014 03:45:00 PM