Even if Republicans win the 'War on Coal' in U.S., the worldwide fight could be a losing battle

Although Republicans have vowed to save the U.S. coal industry by fighting the "War on Coal," they can't do much "to defend the industry against a growing international threat—the drying up of its once-promising markets overseas," Erica Martinson reports for Politico. 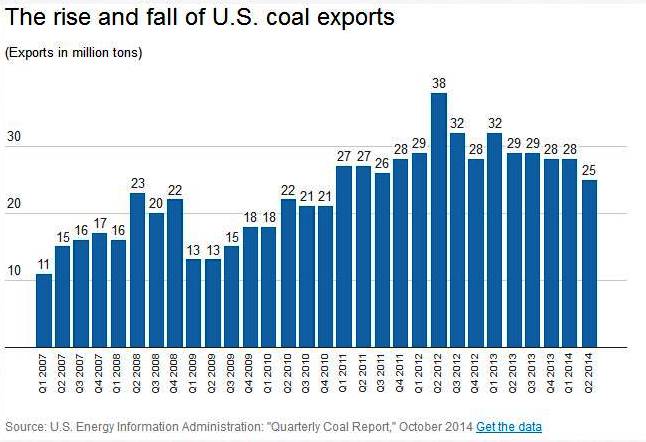 "Coal exports, which more than doubled from 2007 to 2012, are expected to fall by nearly one-fifth this year, the U.S. Energy Information Administration says," Martinson writes. "In 2015, the number of tons exported could hit its lowest level in five years. (Politico graphic)

Prices in Asian markets are plummeting, and cheaper coal is available in Indonesia and Australia, Martinson writes. "Meanwhile, a lot of U.S. coal can’t even get out of the country, thanks to greens’ success in blocking proposed export terminals in Washington state and Oregon. And China, the world’s most voracious coal customer, just pledged to cap its use of the fuel and is promising to curb its greenhouse gas pollution."

Even though the House $1.1 trillion spending deal "bars the Export-Import Bank from cutting off financing for coal-burning plants overseas," the future of coal exports remains murky, with developing nations agreeing in recent talks in Peru to voluntarily reduce carbon dioxide pollution.

"Meanwhile, the World Bank is backing away from funding coal projects, hedge funds are eyeing major U.S. coal companies as high-risk investments and the strong dollar is hampering the market for all kinds of exports," Martinson writes. "The oil train boom also burdens coal producers’ access to rail lines from Western mining hot spots like Wyoming and Montana."

"It’s sobering news for an industry already beset by EPA climate and pollution regulations that Republicans denounce as Obama’s 'War on Coal'—their rallying cry on the way to big victories in the midterm elections," Martinson writes. "And it’s a far stretch from the export-driven boom that coal supporters like House Energy and Commerce Chairman Fred Upton were expecting as recently as a year ago." Upton said in 2013, “All that is missing is the additional infrastructure to make expanded exports possible, and achieving our export potential would have the added benefit of creating thousands, tens of thousands, of new jobs." (Read more)
Written by Tim Mandell Posted at 12/15/2014 04:42:00 PM