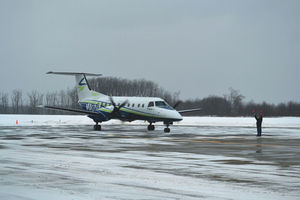 The $1.1 trillion spending bill includes $255 million for a program that boosts rural air service, Collin Deppen reports for The Bradford Era in Northwestern Pennsylvania. Funds will be allocated to the federal Essential Air Service (EAS) program, a network of federal airport subsidies designed to offset the effects of airline deregulation. (Era photo)

"The bill includes $155 million—or a $6 million increase—in payments to participating air carriers, as well as an added $100 million in over-flight fees—or amounts assessed on tickets of foreign originating flights that use U.S. airspace but do not touch down here," Deppen writes.

EAS "was put into place to guarantee that small communities that were served by certificated air carriers before deregulation maintain a minimal level of scheduled air service," says the U.S. Department of Transportation website. "The Department’s mandate is to provide the EAS communities with access to the national air transportation system. As a general matter, this is accomplished by subsidizing two to four round trips a day—with three being the norm—with 19-seat aircraft to a major hub airport. The Department currently subsidizes commuter airlines to serve approximately 163 rural communities across the country that otherwise would not receive any scheduled air service."
Written by Tim Mandell Posted at 12/18/2014 03:46:00 PM