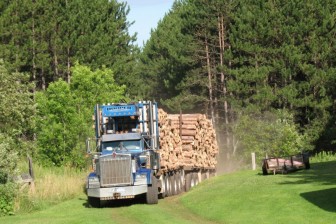 Large numbers of loggers and foresters in Northern Michigan are hitting retirement age, creating a high demand in a profession that is losing workers to more lucrative careers in construction and paper mills, Eric Freedman reports for the Great Lakes Echo, a service of the Center for Environmental Journalism at Michigan State University. (Michigan Farm Bureau photo)

"More than 27,000 jobs are directly in the state’s forest products industry, and more than 146,000 are supported by Michigan forests, according to Michigan State University Extension," Freedman writes. "The demand is expected to continue as the state looks for new uses for forest resources, including products and energy, according to the Michigan Biomaterials Initiative."

The main reasons for the shortages are a lack of training and a lack of knowledge about job opportunities, Brenda Owen, executive director of the Michigan Association of Timbermen, told Freedman. She said, "Everybody thinks they’re going to carry chainsaws, but we have some pretty high-tech jobs available.”

Positions needed to be filled include: lumber graders at sawmills, equipment operators, forklift operators, employees to run state-of-the-art computerized and mechanized equipment that’s operated with a joystick—like a video game—welders able to go into the woods to fix heavy equipment and drivers for logging trucks, Freedman writes.

To spark interest, local institutions have set up academic programs, Freedman writes. Last year seven students enrolled in the new associate degree program in forest technology at Gogebic Community College in Ironwood, and seven more enrolled this year. And all 16 students who graduated from the newly-formed 15-week training program in welding at the Industrial Arts Institute in the Northern Lower Peninsula were offered jobs. (Read more)
Written by Tim Mandell Posted at 12/17/2014 02:38:00 PM