Funds for the Secure Rural Schools program could be coming to an end. The program, which provides funding for rural schools that have struggled to make up shortfalls because of declines in the timber industry, has awarded about $270 million to 729 counties this year, says a press release from the National Association of Counties, Tim Marema writes for the Daily Yonder. But the $1.1 trillion spending package that passed Saturday night does not include funds for the program, which was launched in 2000. Funds from the program also can be used for road maintenance.

"The loss of Secure Rural Schools funding will also affect the distribution of another federal program that is popular with local governments—Payments in Lieu of Taxes or PILT," Marema writes. "This program provides federal support to counties that contain large swaths of untaxed federal lands. Continued funding for PILT was included in the congressional spending package."

"But counties with National Forests are entitled to more PILT funding if the Secure Rural Schools funding isn't forthcoming, according to a press release from the National Association of Counties," Marema writes. "That means the rest of the counties that receive PILT will draw from a diminished funding pool." (Yonder map: Estimated payments that counties received from the Secure Rural Schools program in FY 2013. For an interactive version, click here) 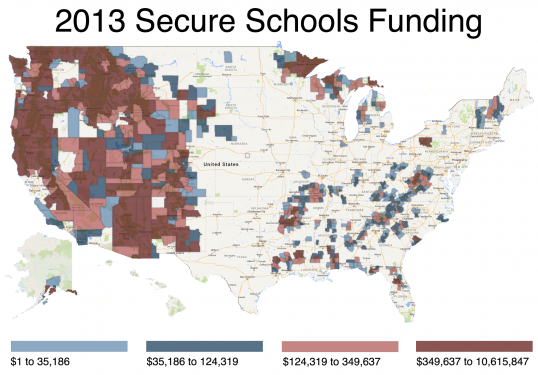