Federal prosecutors on Wednesday "charged Freedom Industries and six of its owners, managers and employees with criminal violations of the Clean Water Act related to the January 2014 chemical leak that contaminated the drinking water of 300,000 people in Charleston and surrounding communities," Ken Ward reports for the Charleston Gazette. 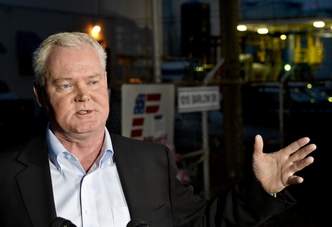 "Dennis P. Farrell, William E. Tis, Charles E. Herzing and Gary L. Southern were each charged with three counts of violating federal environmental laws," Ward writes. "Each man is charged with failing to meet a 'reasonable standard of care' in running the company." Former plant manager Michael E. Burdette and Robert J. Reynolds, an environmental compliance officer, were charged via information with one-count of violating the Clean Water Act. (Gazette photo by Chris Dorst: Gary Southern the day after the January spill. Southern faces 13 charges and a maximum of 68 years in prison)

The indictment said: “Their negligence resulted in and caused the discharge of a pollutant, that is, MCHM, from point sources into the Elk River. Farrell, Tis, Herzing and Southern approved funding only for those projects that would result in increased business revenue for Freedom or that were necessary to make immediate repairs to equipment that was broken or about to break." The indictment says "they failed to take any action to fund other repairs necessary for upkeep or improvements."

Mark Welch, Freedom’s chief restructuring officer, confirmed with the Gazette "that the company had entered into a plea agreement with federal authorities and said the move was aimed partly at limiting the possible fines and criminal defense costs if the company were to be indicted," Ward writes. "Welch, in a prepared statement, said the plea agreement also stipulates that the U.S. Attorney’s Office will not seek restitution from Freedom for victims of the company’s crimes because of the company’s ongoing bankruptcy proceeding." (Read more)
Written by Tim Mandell Posted at 12/18/2014 03:45:00 PM