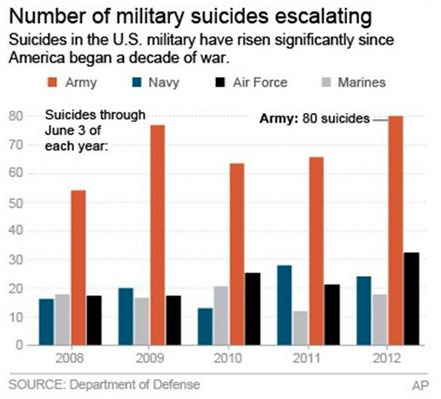 A veterans suicide prevention bill that needed unanimous consent to pass the Senate on Tuesday was blocked by Sen. Tom Coburn (R-Okla.), who said the bill amounted to essentially throwing away money because the goals of the bill are already funded through programs within the Department of Veterans Affairs, Ramsey Cox reports for The Hill. (Associated Press graphic)

The bipartisan bill, which passed the House last week, "would have required the Secretary of Veterans Affairs and the Secretary of Defense to annually arrange for an independent evaluation of the VA and DOD mental health care and suicide prevention programs," Cox writes. "It would also increase the number of psychiatrists at VA facilities."

Coburn said of the bill, “I don’t think this bill is going to do one thing to change what is happening," Cox writes. Because Coburn is retiring, the bill could be brought up again in 2015. Around 4 million veterans are from rural areas, and half of those veterans are 65 or older. It is estimated that 22 veterans commit suicide every day. (Read more)
Written by Tim Mandell Posted at 12/17/2014 02:38:00 PM