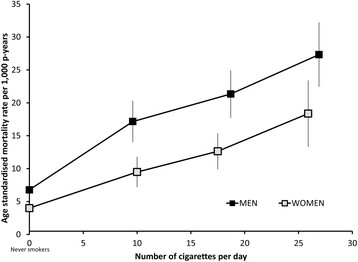 Smokers are dying at increasingly high rates, and 67 percent of smokers die from smoking related illnesses, says a study published this week in BMC Medicine, Danielle Paquette reports for The Washington Post. Smoking rates are especially high in non-metro areas, where 26.9 percent of adults were smokers in 2010, according to a 2014 study by researchers at the University of Washington and in Germany. And recent reports have linked more diseases than previously thought to smoking. (Age standardized rates of all-cause mortality in current smokers and never-smokers, by smoking intensity)

The study, which consisted of 200,000 Australians, found that smoking 10 cigarettes a day doubled the risk of death, and smoking one pack a day quadrupled the risk of death, Paquette writes. Cigarette smoking is the top cause of preventable disease and death in the U.S., accounting for more than 480,000 deaths every year—or one in every five deaths—says the Centers for Disease Control.