Rural and suburban inmates are the majority in Ohio prisons; rise in rural drug abuse to blame

A rise in drug abuse in rural and suburban Ohio has led to a dramatic shift in the state's incarceration rate, Nick Glunt reports for The Medina County Gazette. Since 2011, more than half of the state's new inmates have come from Ohio's 82 rural counties, compared to the 1990s when more than two-thirds of inmates were from the state's six urban counties. "And the shift isn’t limited to counties bordering urban counties: The Gazette’s analysis showed the increase in the number of people sent to prison was greater among counties that weren’t adjacent to urban centers." (The change in Ohio's prison population from 1993 to 2014) 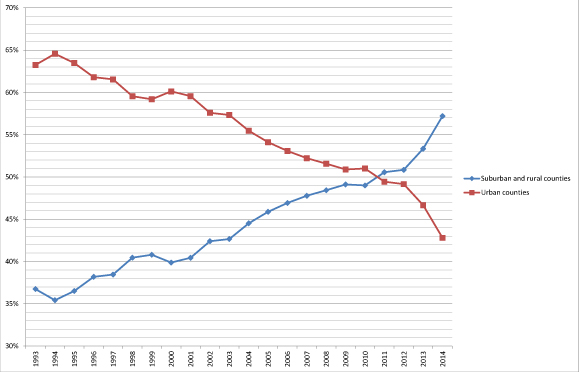 Nearly 92 percent of all inmates in Ohio have a history of drug abuse, but the real story is how counties handle drug offenders, officials say, Glunt writes. Retired judge James L. Kimbler said "an urban judge might be less likely to send a drug offender to prison because he sees so many drug cases," while some rural areas lack a drug treatment center, making prison the only option, especially for repeat offenders. Ohio also has mandatory prison sentences "for having large amounts of drugs, repeatedly committing violent crimes, possessing or brandishing a weapon while committing a crime."

Another possibility for the rise in rural drug incarceration is migration, Glunt writes. For instance, "Medina County’s population rose 41 percent from 1990 to 2010. In that same period, the number of people sent to prison from the county rose by about 48 percent." In Cuyahoga County, where Cleveland is located, the population dropped more than a quarter from 1970 to 2010. (Read more)
Written by Tim Mandell Posted at 2/24/2015 01:29:00 PM