Lack of competition led to a need for net neutrality; FCC has classified broadband Internet service as a public utility

The Federal Communications Commission released the new rules today making broadband Internet service a public utility, a move expected to help rural areas that lack broadband, Rebecca Ruiz and Steve Lohr report for The New York Times. The struggle for an open Internet had led to a massive battle involving Congressional members, large Internet providers and smaller Internet providers and businesses. So, how did we get to this point? 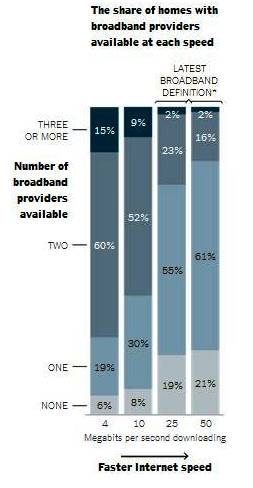 "The case for strong government rules to protect an open Internet rests in large part on a perceived market failure—the lack of competition for high-speed Internet service into American homes," Steve Lohr reports for The New York Times. "The FCC's approach makes sense, proponents say, because for genuine high-speed Internet service most American households now have only one choice, and most often it is a cable company." (NYT graphic)

"The new rules will not ensure competition from new entrants, ranging from next-generation wireless technology to ultrahigh-speed networks built by municipalities," Lohr writes. "Instead, strong regulation is intended to prevent the dominant broadband suppliers from abusing their market power. Technology, of course, can change quickly and unpredictably. So, analysts say, it is impossible to predict what the competitive landscape might look like in several years or a decade from now."

"With or without the new net neutrality rules, cable broadband faces numerous competitors," Lohr writes. "They include upgraded versions of the DSL, or digital subscriber line, technology offered by most telephone companies; next-generation wireless service; Internet access from low-orbit satellites; and very-high-speed fiber optic connections to homes. Each has promise, analysts say, but also limitations. The telecommunications companies have employed a variety of techniques to increase the performance of DSL and have made progress. But cable remains a more capable technology and keeps advancing." (Read more)
Written by Tim Mandell Posted at 2/26/2015 04:59:00 PM