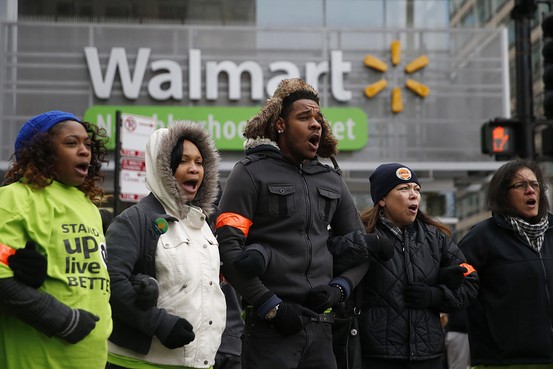 Walmart, one of the biggest businesses in rural America, announced last week that it will voluntarily raise minimum wages to at least $10 per hour by 2016, Byron Tau reports for The Wall Street Journal. "Walmart said the changes aim to reward employees with better pay as well as offer employees closer relationships with supervisors, better management of departments and improved scheduling of hours. It pegged the cost of the moves at $1 billion this fiscal year." (Reuters photo: Walmart employees protesting for higher wages in November 2014)

Some are not applauding the mega-corporation, which has been accused in the past of underpaying workers, Tau writes. Josh Orton, a spokesman with the liberal advocacy group Progressives United, told Tau, "What does it say that Walmart workers getting a raise is huge news? I think everyone would probably agree that Walmart is likely not doing this out of the goodness of their heart. There’s been a long prolonged campaign from low-wage workers nationally to push them in this direction.” Others cheered the news but called on the chain to raise wages to $15 per hour.

One opinion as to why Walmart is making the move is to avoid workers' organizing unions, Max Ehrenfreund reports for The Washington Post. "One unexpected winner from Walmart's decision: taxpayers, who chip in thousands of dollars a year in benefits for minimum-wage workers, according to a report from Democratic staff in the House of Representatives. For all the employees at a typical Wal-Mart Supercenter in Wisconsin, these costs likely total more than $900,000 annually."
Written by Tim Mandell Posted at 2/23/2015 01:48:00 PM