Appalachian commission, at 50, has 'serious work to do,' co-chair says; especially in the central part! 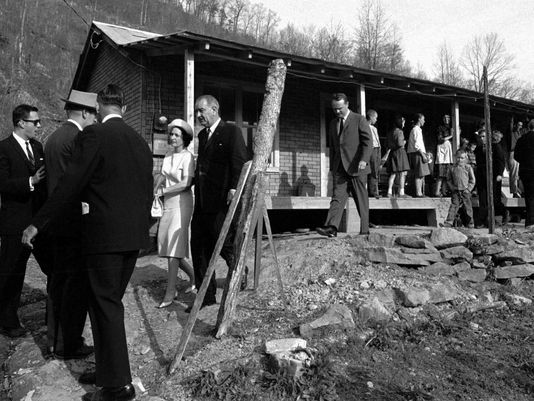 The Appalachian Regional Commission "has helped county economies grow with nearly $4 billion in spending, but the region still lags in key measures of educational, economic and physical well-being," according to a study done for the commission's 50th anniversary, Jonathan Drew reports for The Associated Press. President Lyndon Johnson signed ARC into law on March 9, 1965 as part of his War on Poverty. (AP photo: Johnson visiting Eastern Kentucky in April 1964)

The ARC's mission is to bring Appalachia to socioeconomic parity with the rest of the nation. It has a long way to go. While poverty rates in the region have fallen by about half, "researchers noted that other problems persist, including disproportionately high mortality rates and dependency on government checks," Drew writes. "The commission’s leaders acknowledge that even after half a century, the need for aid is as great as ever, a sentiment echoed by heads of charities in the region." Earl Gohl, the commission’s federal co-chair, told Drew, “We have serious work to do.” 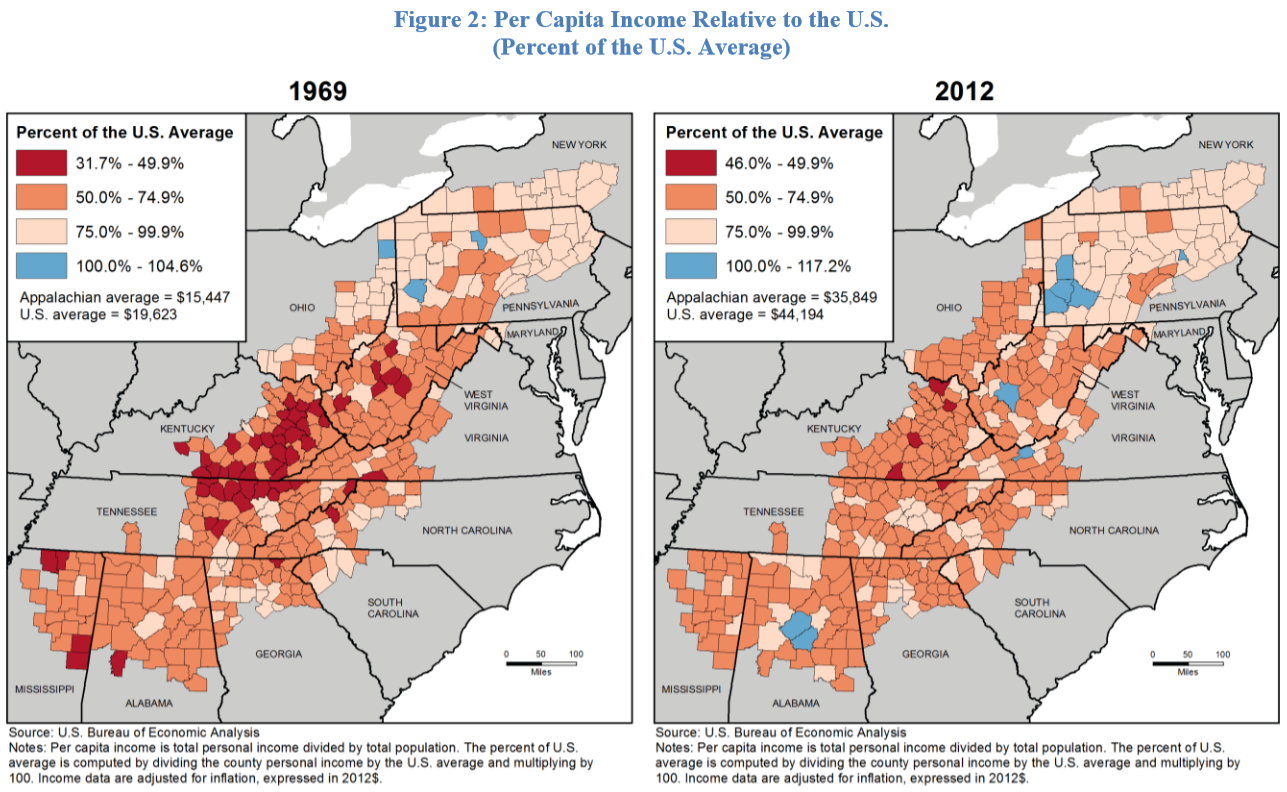 In 1969, Appalachia's per-capita income was 78.7 percent of the national average, with many Central Appalachian counties under 50 percent. (Click on map for larger version) In 2012, the regional percentage was 81.1 percent of the national, "but that’s at least partly because safety-net programs such as Social Security and unemployment make up about 24 percent of personal income in the region, compared to 17 percent nationally," Drew writes. 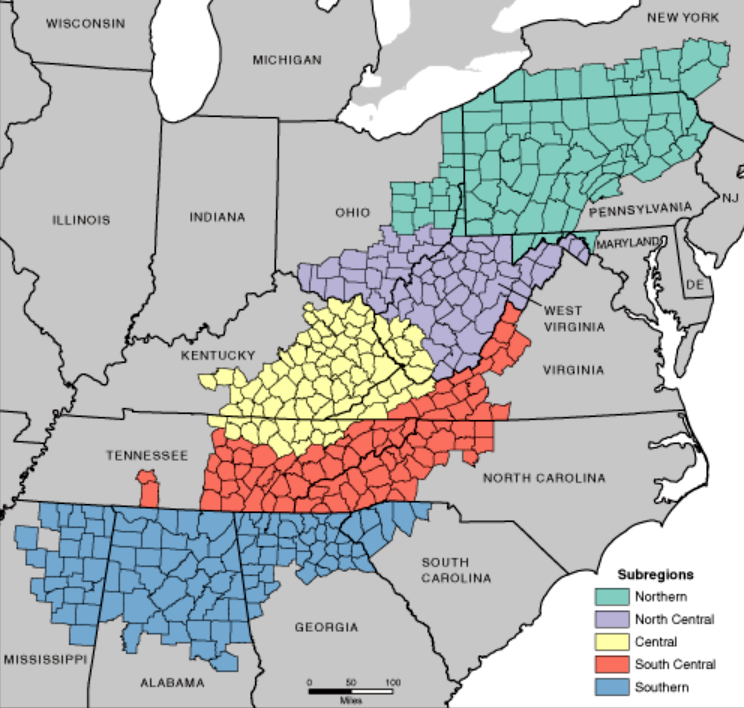 The report focuses no attention on the neediest part of the region, Central Appalachia, which has been hard-hit recently by job losses in the coal industry. The executive summary of the report doesn't even mention "Central Appalachia," and the subregion gets only three mentions in the 181-page technical report. Central Appalachia as defined by ARC is the counties in yellow on the map above. 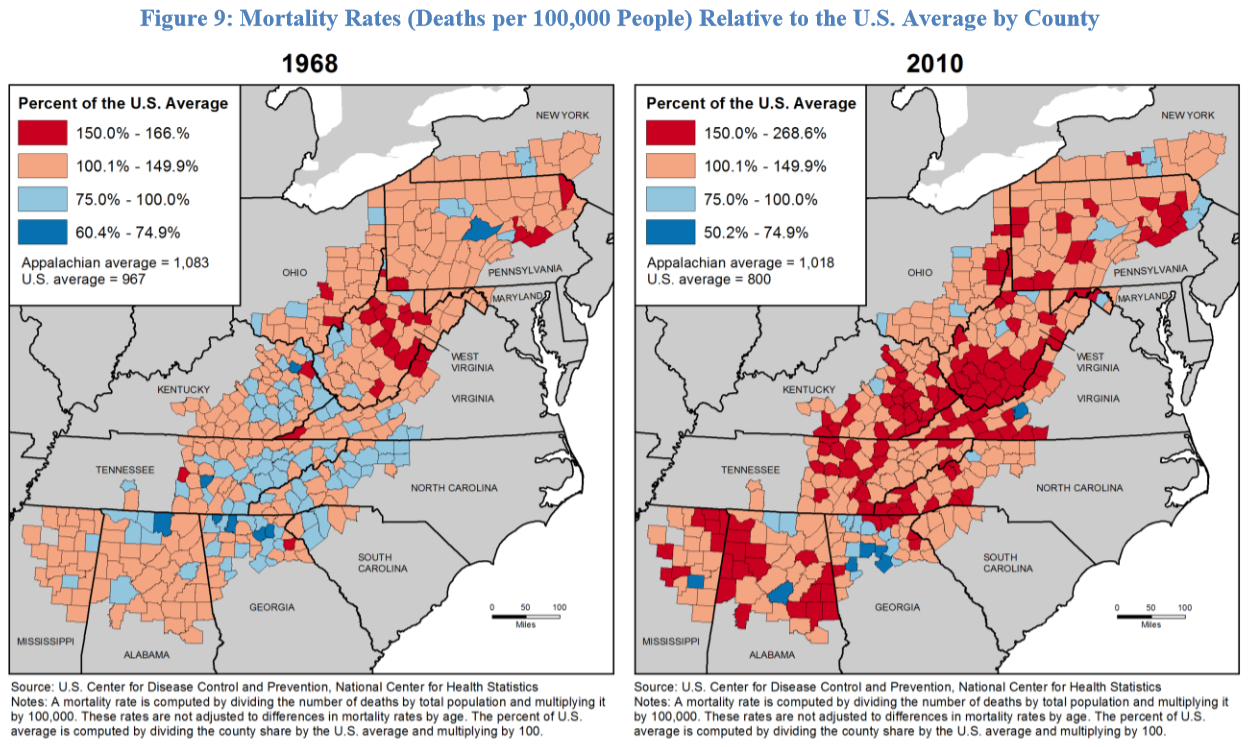 "Researchers did find that county employment and income levels in the region grew faster than a control group of similar counties elsewhere in the country," Drew reports. "Over the 50-year period, counties that received ARC investment averaged 4.2 percent higher employment growth and 5.5 percent higher per capita income growth than the control group counties."

"The report’s authors estimate that more jobs were created by the ARC in its early years when it received higher funding from the government," Drew writes. The Reagan administration wanted to abolish the agency, but Congress refused. However, "The funding levels changed dramatically, and with that the commission changed dramatically as well," Gohl told Drew. "We moved from large appropriations funding big public works projects. And it’s now, I would say, a leaner commission that focuses on developing strategic partnerships.” (Read more) For the full report, click here.
Written by Tim Mandell Posted at 2/23/2015 01:48:00 PM

The first rule of any federal agency is guaranteeing its own future survival.
Therefore, the report needed to strike a balance between positive results and future need.
The results focused on other areas of the region (regardless of how 'Appalachian' they are) because there was more positive results.
To have focused too much attention on Central Appalachia would have questioned the effectiveness of the ARC.
The Central region's purpose in the report? Illustrating future need for the ARC.