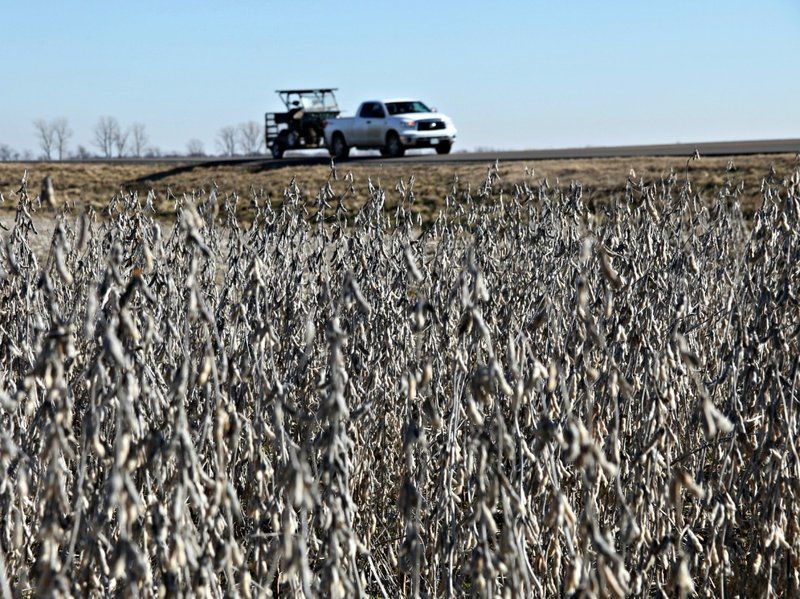 An Army Corps of Engineers $165 million flood project is pitting big farmers against small farmers along the Mississippi River, Kristofor Husted reports for NPR. "On the western shore, farmers in southeast Missouri need the project to protect their valuable farmland. But small river towns on the eastern side of the river say the project protects those influential farmers at the cost of their small communities." (Husted photo: A truck drives on top of a levee that protects a soybean field in New Madrid County, Missouri, when the Mississippi River floods)

The New Madrid Floodway Project is designed to protect the land around the Mississippi River, where farmers grow millions of dollars' worth of soybeans, corn, cotton and rice, Husted writes. "The Corps wants to effectively separate the farmland from the river by completing the levee system and building an earthen wall along a 1,500-foot gap. This final levee would essentially cordon off the lucrative farmland in the floodway, protecting the crops from most floods. That's good for farmers west of the river but maybe not so good for towns on the other side."

"The levee system protects the farms most of the time, but every 75 years or so, a major flood slams the area. Then, the New Madrid Floodway has to be opened up and used as, well, a floodway," Husted writes. "Now, the Army Corps wants to close off the last part of the levee system, and that's pitting some deep-pocketed farm owners against less wealthy towns like Cairo. Environmental groups, like the U.S. Fish and Wildlife Service, are also fighting the project. They say cutting off the floodway with a plug would be catastrophic for the 50,000 acres of wetland that fish and waterfowl call home." (Read more)
Written by Tim Mandell Posted at 2/24/2015 01:28:00 PM