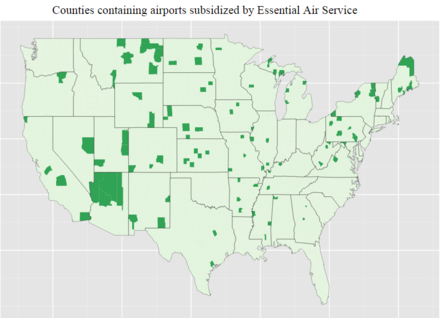 The Essential Air Service program is an important government-funded resource that provides 113 separate commercial flights to rural and remote areas. Many of the flights are sparsely booked, so some planes travel with only a handful of passengers, a fact that has some questioning the usefulness of a costly program that serves only a small number of individuals. (Wikipedia map)

"The cost to taxpayers for subsidizing those journeys has quadrupled in the last decade to a whopping $261 million, which has some lawmakers convinced the program is anything but essential," Kris Van Cleave reports for CBS This Morning. For example, a 50-seat jet that leaves Denver twice per day for two remote North Dakota towns costs the U.S. Department of Transportation more than $6 million a year.

But others are not convinced, especially since government data shows that 44 of the routes flew at least two-thirds empty last year, Van Cleave writes. Steve Ellis, president of Taxpayers for Common Sense, told Van Cleave, "The Essential Air Service is really a relic of deregulation, airline deregulation, back in the 70s. We shouldn't be spending hundreds of millions just to make things a little easier for a few people to actually get to the airport." (Read more)
Written by Tim Mandell Posted at 2/24/2015 01:31:00 PM