50 years after War on Poverty was declared, some parts of Central Appalachia are losing ground

Fifty years after President Lyndon Johnson declared a War on Poverty, some of the most impoverished towns and counties in the region have taken a step backward, especially during the last 15 years, University of New Hampshire sociologist Cynthia Mildred "Mil" Duncan told The Economist. Duncan recently returned to the region to update her 1999 book Worlds Apart.

The debate over whether or not the War on Poverty has been a success has been argued in Congress, the British magazine reports. "Republicans claim that the well-meaning programs it spawned have trapped people in poverty rather than liberating them. Democrats, meanwhile, have leapt to the defense of federal transfer payments, and continue to put their hopes for the poorest bits of rural America in government-led economic development. It is possible that both sides are wrong."

While the income gap between Appalachia and the rest of the country has closed, largely due to government funding, many areas still have high poverty rates, and the region's health has also suffered in recent years, especially in Eastern Kentucky, the magazine reports. (Economist graphics; click on image for larger version) 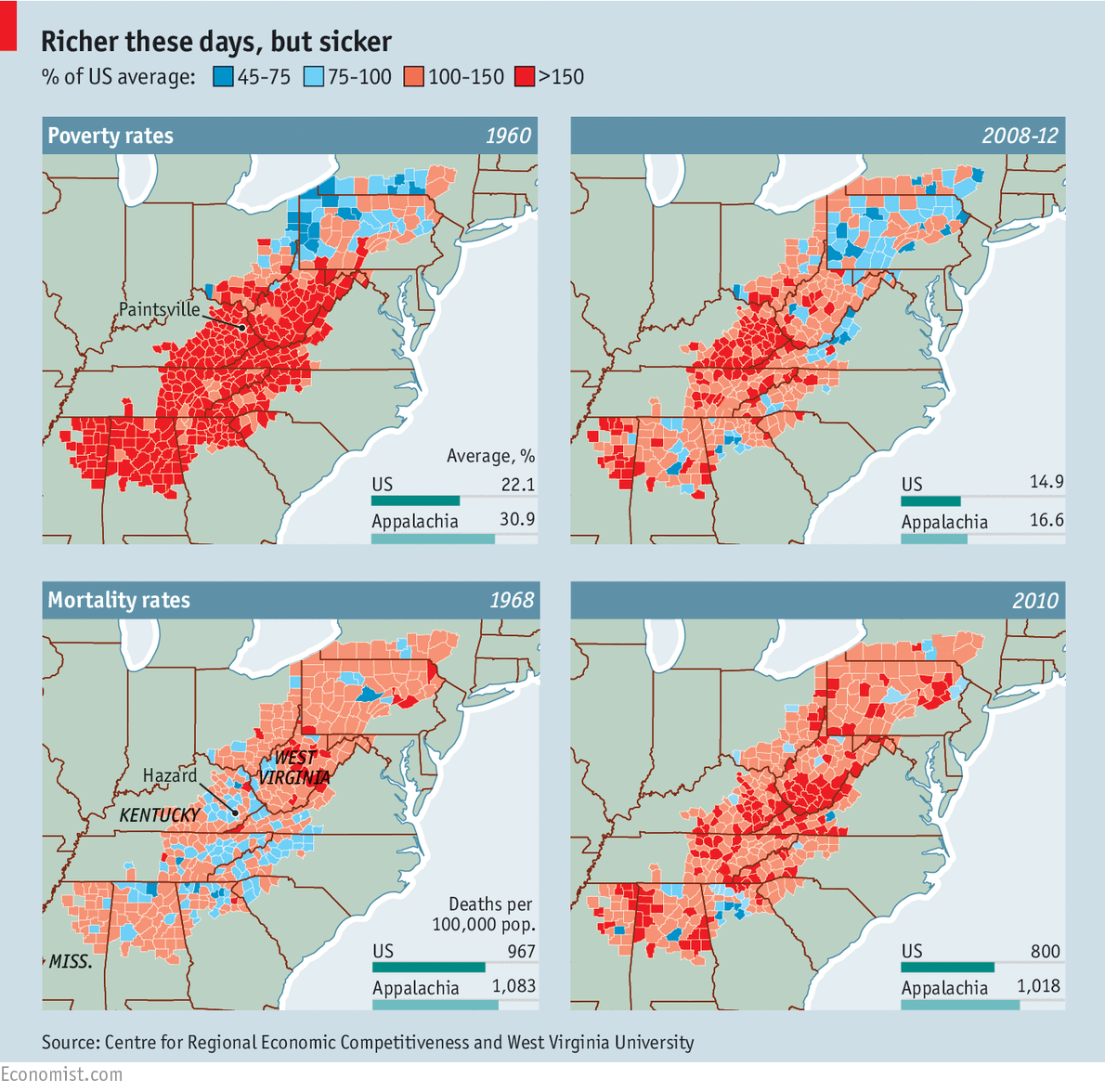 "The combination of diabetes and the outflow of young people has led to a widening of the difference with the rest of the country in mortality rates, which measure the number of deaths as a share of the population. Male life expectancy at birth in Perry County is just 66.5 years, about the same as in Mongolia. Female life expectancy is better, but it has declined by two-and-a-half years since 1985."

Even though federal health reform has been a huge success in Kentucky, with the number of uninsured people dropping from 20.4 percent to 9.8 percent, Obama is highly unpopular in the state. Democratic Gov. Steve Beshear, who expanded Medicaid under Obamacare, is term-limited, meaning the state could soon have a Republican governor, but neither of the likely GOP nominees has joined Tea Party favorite Matt Bevin in calling and an end to the expansion.

West Virginia, long a stronghold of Democrats, has already seen a shift, with Republicans gaining control in the last election. "Central Appalachia has borne painful changes for decades and yet there is still no end to them in sight," the magazine says. "In these circumstances, it is not surprising that a party that is offering to make it all go away seems more appealing than one that can offer only more of the same." (Read more)
Written by Tim Mandell Posted at 3/20/2015 11:45:00 AM