Business is booming for Western Kentucky fisheries that process Asian carp and sell it to China, Korea 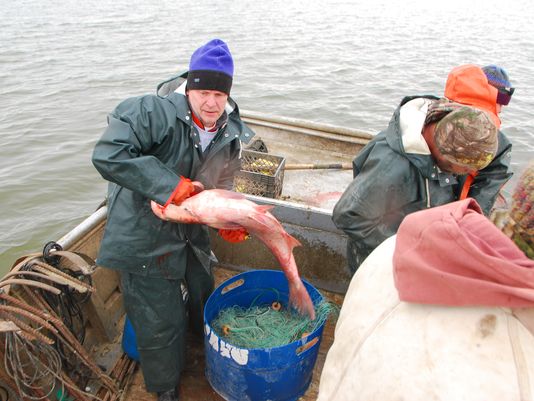 While Great Lakes states are contending with an influx of invasive Asian carp that are threatening the fishing industry, business is booming for fisheries in Kentucky that process the species to be shipped to Asian countries such as China and Korea, Jere Downs reports for The Courier-Journal in Louisville. Carp, a favorite for fish balls and dumpling filling, is the second most eaten fish in the world. (C-J photo: Fisher-processor John Crilly hefts a 25-pound Asian silver carp into the hold of a fishing boat on Kentucky Lake)

RCB Fish Co., which has only been in business since February, is already taking big orders, with a bulletin board displaying current orders that include "12 tons of fish heads, six tons of silver carp meat, one ton of grass carp, and nearly seven tons of surimi, a paste of fish and natural ingredients like egg white that is most often processed to become imitation crab meat overseas," Downs writes.

"A third new Asian carp processing plant, Riverine Fisheries, aims to moor a fish factory barge on the Mississippi River in Hickman, Kentucky, to create 110 new jobs by year's end," Downs reports. The three companies "have received preliminary approval to receive state tax incentives worth a combined $5 million to process and market the carp to consumers worldwide," she writes in another story.
Written by Tim Mandell Posted at 3/16/2015 12:31:00 PM