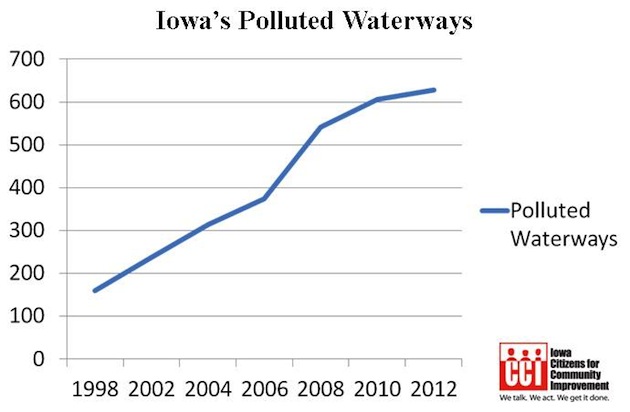 The urban vs. rural battle in Iowa over who is to blame for water pollution has led the Des Moines Water Works board to unanimously vote to file a federal suit against the northwestern counties of Sac, Calhoun and Buena Vista, Timothy Meinch reports for The Des Moines Register. The move "could have far-reaching effects on how states approach water quality regulation." (Mother Jones graphic)

"Water Works officials and a crowd of supportive residents criticized the state's voluntary nutrient-reduction strategy for farmers," saying it is insufficient for protecting Iowa waterways, Meinch writes. The lawsuit "claims drainage districts act as a conduit, channeling fertilizer and manure between farm fields and waterways. Water Works officials said these districts should be regulated with special permits under the Clean Water Act."