California farmers and other landowners are obstacles for bullet train from L.A. to San Francisco

California's bullet train is having a hard time getting on track. The state's $68 billion high-speed rail system, which is already two years behind schedule, has run into problems over property rights with Central Valley farmers and land investors who are not willing to sell, Ralph Vartabedian reports for the Los Angeles Times.

"When the state chose to start construction of the high-speed rail in the Central Valley, it was based partly on the theory that assembling needed land would be easiest in the state's rural backbone," Vartabedian writes. "As it turns out, some of the farmers most resistant to accepting state offers are proving to be wealthy, highly educated professionals and investors—and formidable opponents in negotiations." 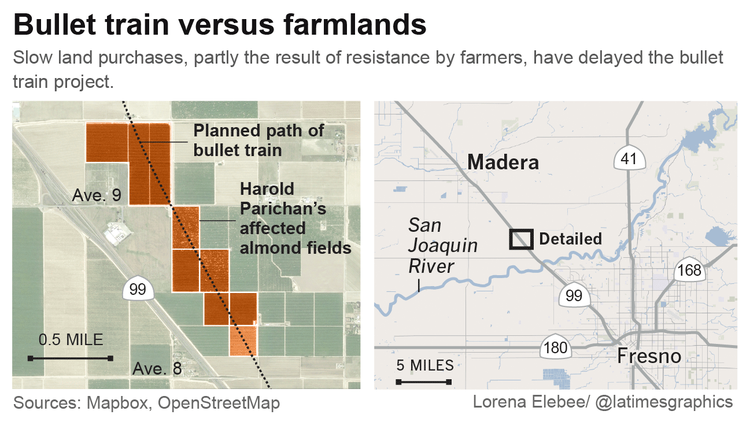 The project, scheduled to be completed in 2029, would have trains traveling upwards of 200 mph from Los Angeles to San Francisco. But officials are having a hard time completing the first 29-mile section. "In all, the state's High Speed Rail Authority needs 525 parcels for the first phase of construction. It has completed deals with owners of 123 properties," Vartabedian writes. "Several other disputes have been resolved in recent weeks. But an additional 154 owners rejected initial offers, and the state began the eminent-domain process to force owners to sell."

"A surge of lawsuits over land acquisition could entangle the rail agency in a bottleneck outside its control: local court systems where attorneys say just getting a pretrial hearing can take months," Vartabedian writes. One problem, rural landowners say, is that "No farmers serve on the high-speed-rail board, and critics contend the state hasn't sought to engage growers in the planning process." (Read more)
Written by Tim Mandell Posted at 3/17/2015 11:15:00 AM