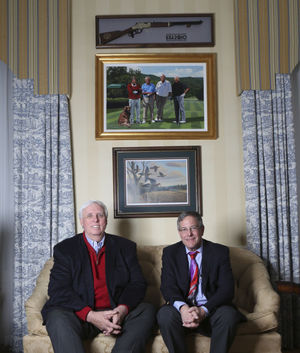 Conservationist and health-care executive Tom Clarke, who has been critical of Southern Coal and owner Jim Justice, even going so far as to buy a billboard to condemn the company for its repeated violations and unpaid fines, is now working as an unpaid consultant to help Southern solve its problems, Jeff Sturgeon reports for The Roanoke Times. (Times photo by Stephanie Klein-Davis: Justice and Clarke; Justice owns The Greenbrier resort)

In early 2014 Justice's son Jay, who runs Southern Coal, agreed to meet with Clarke, who said he wanted to help instead of just being a critic, Sturgeon writes. "Jay Justice, though skeptical at first, said he connected with Clarke’s sincerity and valued his expertise, and the two bonded around a common interest in land conservation." Since joining Southern Coal in November 2014, Clarke has "helped orchestrate a coherent response to problems that the Justices alone had been unable to sort out in a timely fashion." Jay told Sturgeon, “What we needed was a path to be able to genuinely fulfill the obligations, and that’s what Tom’s really providing us or assisting us with."

It hasn't been an easy job. Southern Coal, which employs 1,000 people in Kentucky, West Virginia, Alabama and Tennessee, owed $7 million in fines, had $6 million in reclamation work to perform and at one time faced more than 300 violations, Sturgeon writes.

"The Justices, who had one of the worst compliance records in coal mining, now say they intend to address all deficiencies with the help of the sharp-tongued environmentalist who disparaged them, time and again last year, in editorials and letters and calls to government officials," Sturgeon writes. "In addition to partnering with Clarke, the Justices appointed a veteran coal executive as their new chief operating officer, and he’s been tasked with executing the turnaround." Critics of Southern Coal have applauded the partnership, but remain optimistically skeptical as they wait to see how it plays out. (Read more)
Written by Tim Mandell Posted at 3/18/2015 11:05:00 AM