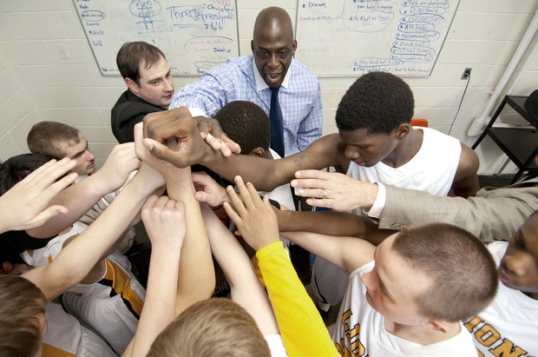 As the Kentucky boys state high school basketball tournament begins today, a battle is brewing in a small Eastern Kentucky town over its school's basketball program coached by a former University of Kentucky player, Willie Davis reports for the Daily Yonder. Cordia School in Knott County is in a fight with the Kentucky High School Athletic Association, which claims coach Rodrick Rhodes, who became the boys basketball coach three years ago, is illegally recruiting players from out of state, or even outside the U.S. Rhodes says Cordia is not a basketball factory and he is giving at-risk students a chance to succeed. (Photo by John Flavell: Rhodes huddles with players before a game)

KHSAA disagrees. It has banned players, and initially banned the school from boys' basketball games this season and the 2015-16 postseason and fined the school $26,000. Rhodes and most of the imported players are black, with most players coming from violent homes in places such as New York, Canada and Mali, Davis writes. Cordia is largely white.

Rhodes said, “We’re saving these kids’ lives. Two of the kids have been shot where they were from. …You can’t walk to school without being recruited to a gang. Who wants that? It’s not about basketball. Our players aren’t great players. They’re fragile, fractured kids. If they’re so great, these teams wouldn’t let them go. I’m not getting McDonald's All Americans. If I was, my records would be a lot better. We’re not getting great basketball players. We’re getting black kids, so people assume they’re phenomenal. But this isn’t about basketball. I promise you, it’s so much bigger than that.”

KHSAA has since reversed many of the sanctions against the school, Davis writes. "Although the board upheld 17 out of 27 of the convictions and maintained both the $26,000 fine and the two-year post-season ban, they modified the biggest ban. Cordia was allowed to play 12 games this season, going 8-4. Davis did not quote anyone from KHSAA in his story.
Written by Tim Mandell Posted at 3/18/2015 09:58:00 AM