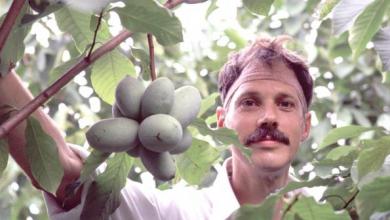 Nearly 500 years after the pawpaw—the nation’s largest indigenous edible fruit—was discovered by European settlers, it is finally being positioned for international production and distribution, thanks in large part to rural West Virginia breeder Neal Peterson, who has spent his life breeding pawpaws to make them commercially viable, David Bennett reports for Delta Farm Press.

Peterson, who compares the flavor to everything from apricots to apples to peaches, first learned of the fruit in 1975. Since then he's been trying to get pawpaws in stores. Recently, Peterson has been running a Kickstarter campaign to raise funds for trademarks on his pawpaw varieties.

Peterson says native pawpaws can be found in 26 states. He says interest has grown outside the U.S., especially in Germany and Japan, but customs laws have made it difficult to ship trees to prospective buyers. Still, Peterson remains optimistic. He told Bennett, “Someday, people will know what pawpaws are and they’ll buy them from the grocery store. But we’re still in the early stages." (Read more)
Written by Tim Mandell Posted at 3/20/2015 10:37:00 AM