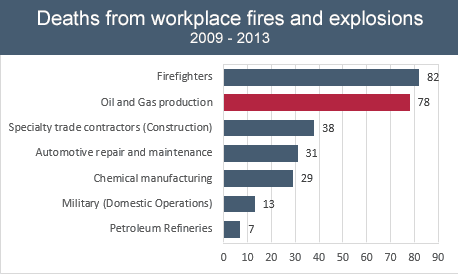 Falling prices have sent the oil industry into a downturn, with companies announcing more than $40 billion in spending cuts and eliminating 100,000 jobs, reports Fuel Fix. But that doesn't mean safety is no longer a concern, as evidenced by a deadly explosion last week in Texas that killed three workers. In 2013 the oil and gas industry had 112 fatalities, a 31 percent increase over 2003, said the U.S. Bureau of Labor Statistics. During that same time period the industry doubled its payroll to 507,000 workers. (EnergyWire graphic)

Some industry experts say a downturn could lead to safer conditions, with younger, less experienced workers leaving for other jobs, Fuel Fix reports. "Oilfield deaths fell by 43 percent in 2009 to 68, the lowest amount in a decade, as a collapse in natural gas prices led to drilling cutbacks, according to the Bureau of Labor Statistics. The number of active drilling rigs, a measure of workload, fell 57 percent from August 2008 to June 2009, according to Baker Hughes data compiled by Bloomberg." (Read more)
Written by Tim Mandell Posted at 3/16/2015 12:09:00 PM