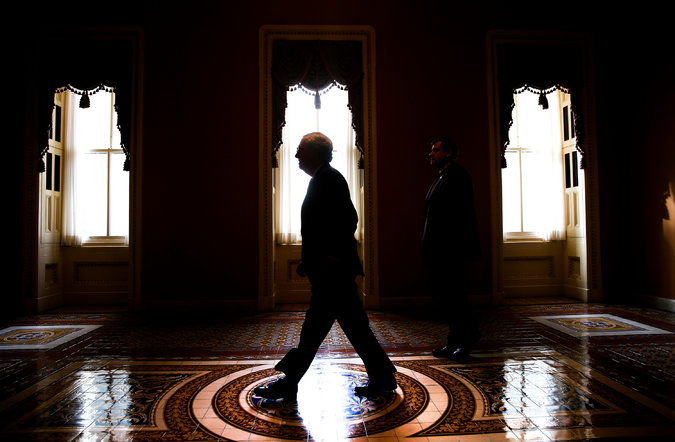 It's no secret that Senate Majority Leader Mitch McConnell (R-Ky.) is against the Obama administration's proposed rules to cut carbon-dioxide emissions by 2030 from existing power plants based on emission levels from 2005. But now he is going beyond urging states to ignore a central part of the plans and trying to coordinate a state-level campaign of disobedience. (New York Times photo of McConnell by Doug Mills)

Since McConnell is limited in being able to block regulations, and the Republican-controlled Congress lacks enough votes to override a presidential veto, he is taking "the unusual step of reaching out to governors with a legal blueprint for them to follow to stop the rules in their states," Coral Davenport reports for The New York Times. "McConnell’s Senate staff, led by his longtime senior energy adviser, Neil Chatterjee, is coordinating with lawyers and lobbying firms to try to ensure that the state plans are tangled up in legal delays."

McConnell on Thursday "sent a detailed letter to every governor in the United States laying out a carefully researched legal argument as to why states should not comply with Obama’s regulations," Davenport writes. "In the letter, McConnell wrote that the president was 'allowing the EPA to wrest control of a state’s energy policy.'”

McConnell is also taking his campaign outside the U.S. in an attempt "to undercut Obama’s position internationally as he tries to negotiate a global climate change treaty to be signed in Paris in December," Davenport writes. "The idea is to create uncertainty in the minds of other world leaders as to whether the United States can follow through on its pledges to cut emissions."

"McConnell contends that the Obama administration has bypassed Congress and stretched the boundaries of existing law to impose climate change regulations—and that he intends to step outside of Congress and use creative legal methods to push back," Davenport writes. McConnell said, “The EPA is bypassing Congress and the American people by unilaterally proposing these crippling regulations that would wreak havoc on our economy and are clearly unprecedented. I have used and will continue to use all of the tools available to protect families and jobs, whether that be in Congress, or outside of the legislative process.” (Read more)
Written by Tim Mandell Posted at 3/20/2015 10:48:00 AM