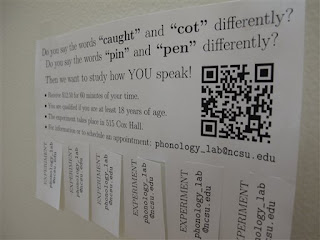 Researchers are interviewing Appalachian residents in an attempt to record the region's many dialects to show "that Appalachian residents speak a variety of Englishes—and not a single monolithic dialect—and that scorn for the region's speech is often based on outdated notions of how they talk," Jonathan Drew reports for The Associated Press. (AP photo by Allen Breed: A flyer in the North Carolina State University linguistics department)

Kirk Hazen, a West Virginia University linguist, has spent two decades conducting interviews throughout the state, asking residents basic questions about friends, community and their love lives, Drew writes. Hazen told Drew, "You're trying to get across the idea that all language varieties are legitimate. There's not one that's somehow damaged and then others that are just fine. They're all just fine."

"The first step in changing perceptions of mountain speech is documenting how contemporary Appalachian residents talk," Drew writes. "Hazen has used his research to illustrate that other stereotypical features of Appalachian speech have become rare—such as the demonstrative "them" ('them apples are the best') or a-prefixing ('I'm a-going to the store')." But some other Appalachianisms, like redundant pronouns ('Both sides, they always ask'), are increasingly heard in the rest of the country, even on major broadcast networks.

"Despite Hazen's research, many outsiders still have negative impressions about mountain accents, sometimes based on outdated speech features," Drew reports. "It can take decades for perceptions to change."

In southwest Virginia, middle-school teacher Lizbeth Phillips "assigns her students to keep journals of how adults in their community switch between formal and casual ways of speaking," Drew writes. "Educators say the approach known as code- or style-switching allows students to preserve the way they speak at home and improve their writing without feeling ashamed."