Coal bond prices fell 17 percent in the second quarter, marking "the fourth consecutive quarter of price declines and the worst performance of any industry group by a long shot," Tom Randall reports for Bloomberg. Alpha Natural Resources had the biggest decline, at 70 percent, while Peabody fell 40 percent and Arch 30 percent.

"Bonds fluctuate less than stocks because the payoff is fixed and pretty much guaranteed as long as the borrower remains solvent. A 17 percent decline is huge, and it happened at a time when other energy bonds—oil and gas—were rising," Randall writes.

The biggest concerns facing the coal industry are that 17 percent of coal-fired plants will shutter over the next few years, China's coal demand is remaining flat and renewable energy is on the rise, Randall writes. Also, declining bond prices means "the cost of borrowing money goes up. And coal needs more money. Coal companies are allowed to avoid costly insurance premiums by showing they have the capital to clean up after themselves. It's called self-bonding. This year the federal government has started taking a closer look at whether the struggling coal companies still qualify."

"In the past year, global stock prices for coal companies are down almost 50 percent, but it's in the bond market that coal is really getting hammered," Randall writes. "The focus of energy finance has shifted from coal to renewables, and it's not likely to turn back." (Read more) (Bloomberg map: Coal plants on the way out by 2020. To view a larger map, click here.) 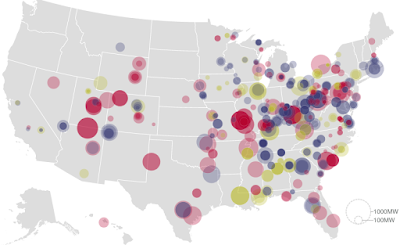