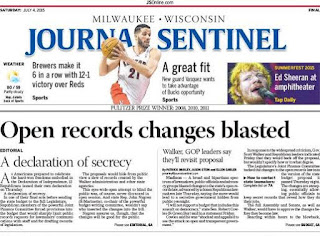 A media campaign to fight a decision by a Wisconsin legislative committee to limit open records resulted in a victory for the press. Gov. Scott Walker and GOP legislative leaders announced in a joint statement that the change would be eliminated from a proposed budget bill, Anna Clark reports for Columbia Journalism Review. (The Milwaukee Journal Sentinel used its front page to blast the decision)

On July 2 "the Republican-led legislature’s joint finance committee voted along party lines, 12-4, to add a broad provision to the budget bill that would deny reporters or members of the public to have access "to communications between elected officials and their staff or 'deliberative materials,' such as draft legislation and briefings," Clark writes. "The measure also would have created a nationally unprecedented 'legislator disclosure privilege,' permitting lawmakers to keep records secret if they are being sued, empowering them to bar current and former staff from disclosing information and admonishing legislative agencies to 'at all times observe the confidential nature' of records covered by the privilege."

Newspapers responded to the move by blasting the decision in stories and editorials, Clark writes. Andy Hall, executive director of the Wisconsin Center for Investigative Journalism, told Clark, “News organizations around the state showed that, despite recent staff reductions, when necessary, they can marshal resources to aggressively cover a story that literally threatens our democracy.”

On July 4, Walker and legislators announced they would abandon the measure, saying in a statement that it was only meant to "provide a reasonable solution to protect constituents’ privacy and to encourage a deliberative process between elected officials and their staff in developing policy. It was never intended to inhibit transparent government in any way,” Clark writes.
Written by Tim Mandell Posted at 7/13/2015 03:03:00 PM