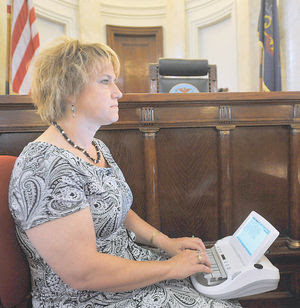 Fewer training programs, aging employees on the cusp of retirement and recent graduates opting to take higher salaried positions in metro areas are leading to a shortage of qualified court reporters in rural areas, Jocelyn Brumbaugh reports for The Tribune-Democrat in Johnstown. Pennsylvania, which at one point had about a dozen court reporting programs, now only has two. (Tribune-Democrat photo by Todd Berkley: Cambria County court reporter Shana Grow)

"According to a 2013 study conducted by the National Court Reporters Association based in Vienna, Va., the demand for court reporters will soon exceed the supply nationwide, despite a transition to digital recording in some courtrooms," Brumbaugh writes. The study said, “Decreased enrollment and graduation rates for court reporters, combined with significant retirement rates, will create by 2018 a critical shortfall predicted to represent nearly 5,500 court reporting positions."

In Cambria County, only nine of 10 court reporter positions have been filled, and two or three current employees are considering retirement in the next year, Brumbaugh writes. Filling open positions has been difficult, said President Judge Timothy Creany. He told Brumbaugh, "We have a real problem. I don’t know how we’re going to be able to address it."

One problem is that metro court reporters often earn more money because "court reporters are reimbursed at a certain rate for the transcripts they type," Brumbaugh writes. Another problem is that some metro areas have switched to digital voice recognition devices, which some people claim are easier to use. But rural officials say the technology can prove untrustworthy if more than one person is speaking at the same time. (Read more)
Written by Tim Mandell Posted at 7/13/2015 03:05:00 PM