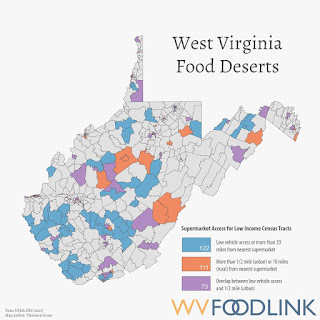 Residents in more than 40 counties in West Virginia "endure some sort of limited food access, and the number is growing as more and more grocery stores close their doors," Roxy Todd and Jessica Lilly report for West Virginia Public Broadcasting. The story is part of a audio report on Appalachian food deserts.

The U.S. Department of Agriculture defines a rural food desert as a low-income community where at least 500 persons and/or at least 33 percent of the census tract's population live more than 10 miles from a supermarket or large grocery store. There are 2.3 million people in the U.S. living in rural food deserts.

Bradley Wilson, a geography professor at West Virginia University said the term "food desert" often confuses people, Todd and Lilly write. He told them, “A desert is something natural, and there’s nothing natural about food deserts. A food desert is the retreat of grocery stores from a particular area. A food desert is really a symptom of a broader economic change that’s taking place. I don’t look at those as natural." To hear the entire story, click here. 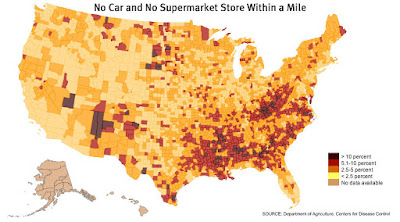