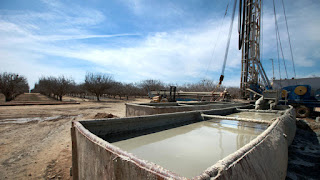 The impact of hydraulic fracturing chemicals on drinking water, wildlife and crops are mostly unknown, said a report from the California Council on Science and Technology, Julie Cart reports for the Los Angeles Times. The report "said that because of data gaps and inadequate state testing, overwhelmed regulatory agencies do not have a complete picture of what oil companies are doing." (Times photo by Brian van der Brug: fracking fluids flow into containment tanks on a fracked oil well near Bakersfield in March)

"The risks and hazards associated with about two-thirds of the additives used in fracking are not clear, and the toxicity of more than half, the report concluded, remains 'uninvestigated, unmeasured and unknown. Basic information about how these chemicals would move through the environment does not exist,'" Cart writes.

"Recycled oil field wastewater used for crop irrigation may contain chemicals used during fracking and other well stimulation procedures, the report said," Cart writes. "While treatment of that water is required, the testing is not adequate, the report said. The probability of toxic exposure to humans and the environment is low, but no studies have been conducted assessing the risk, the report's authors said."

Researchers said "the potential for contamination linked to fracking "demands that the state conduct more thorough studies in order to close significant data gaps," Cart writes. For example, there is little evidence to show that oil activities are contaminating groundwater, researchers said, but little analysis has been done." (Read more)
Written by Tim Mandell Posted at 7/13/2015 03:03:00 PM