More than 1/4 of all rural children live in poverty; interactive map has data for each county

In 2013 nearly 2.6 million children under 18 outside metropolitan areas were living in poverty, a rate of 26 percent, up from 19 percent in 1999, says a report by the Economic Research Service of the U.S. Department of Agriculture, David McGranahan reports for USDA and ERS. The metro rate was 21 percent in 2013, compared to 16 percent in 1999.

The report is accompanied by an interactive map giving data for each county. Here's a screen grab of the map: 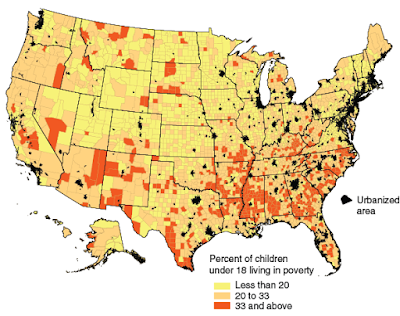 Researchers found that the Great Recession, lack of education among parents, and single-parent households were the main factors in the increase in numbers, McGranahan writes. "Counties where low proportions of young adults (ages 25 to 44) have completed high school are likely to have more children in families with low educational attainment and higher child poverty levels." Also, "the poverty rate for rural children in single-parent families was 50 percent, compared with 13 percent for children in rural married-couple families."

They also noted that counties that rely on manufacturing had the greatest number of poor children. Tim Marema notes for the Daily Yonder, "In rural manufacturing counties, child poverty climbed by 45 percent from 1999 to 2009-2013. During the same period, roughly one in four rural manufacturing jobs disappeared, according to the report. In contrast, agriculture-dependent rural counties saw an increase of about 6 percent in child poverty. Child poverty increased by about 5 percent in rural counties that depend heavily on the recreation industry. In mining counties child poverty also grew by about 5 percent. And counties that don’t fall into one of the other economic categories saw a child-poverty increase of 22 percent."
Written by Tim Mandell Posted at 7/14/2015 04:00:00 PM