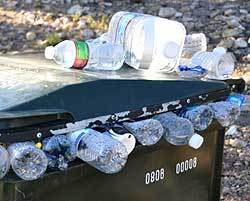 In an attempt to reduce trash and litter in national parks, the National Park Service is allowing parks to stop selling disposable bottles and instead have visitors refill reusable ones with public drinking water, Lisa Rein reports for The Washington Post. But water-bottling firms that brings in billions of dollars a year and employs thousands, have stepped in to block the parks from banning the plastic pollutants—and the industry found an ally on Capitol Hill to add a little-noticed amendment to a House spending bill that would kill the policy." (NPS photo)

"As environmental groups and local officials campaign for a sales ban to reduce park waste and carbon emissions, the titans that manufacture Deer Park, Fiji, Evian and 200 other brands of water packaged in disposable plastic have mounted a full-court lobbying campaign on Capitol Hill to stop the Park Service’s latest effort at sustainability," Rein writes.

Chris Hogan, vice president of communications for the International Bottled Water Association, which represents 200 bottlers, told Rein, “This is a prominent, misleading attack on bottled water that has no justification." Big Water's campaign claims the move by the park service is promoting an unhealthy lifestyle, because it's leading to more visitors choosing to drink soda, instead of water.

Park Service Director John Jarvis "issued a memo to the system’s 408 parks, national monuments and historical sites, allowing them to eliminate sales of disposable plastic water bottles," Rein writes. "The bottles were clogging the waste stream, he wrote in 2011, eating up recycling budgets at a lot of parks." About 20 parks have sworn off water sales, but the number could be higher, because parks are not required to notify headquarters when they change their policies on concessions. (Read more)
Written by Tim Mandell Posted at 7/16/2015 02:12:00 PM