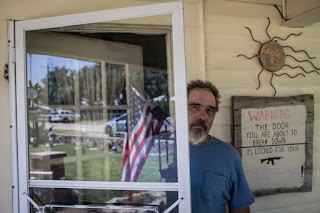 Paranoia has taken hold among some in East Texas, with fear of a government takeover, Manny Fernandez reports for The New York Times. Jade Helm 15 is an eight-week military exercise that began today in Texas, Arizona, Florida, Louisiana, Mississippi, New Mexico and Utah. But in some rural Texas towns, the maneuver "has generated paranoia for months fueled by conservative bloggers and Internet postings." (NYT photo by Tamir Kalifa: Scott Degenaer, outside his home in Christoval, Texas)

"Local officials who have been briefed on the exercise say it is modeled after the French resistance to Nazi occupation during World War II," Fernandez writes. "It calls for some military personnel to play the role of the occupiers and for others to work undetected as part of the resistance. Military maps show Texas and Utah as 'hostile,' other states as 'permissive,' and still others as uncertain but leaning hostile or friendly."

In the East Texas town of Christoval, distrust of President Obama has led some of the 422 residents to bury weapons or stock up on ammunition, Fernandez writes. "According to some right-wing bloggers and activists, the exercise is part of a secret plot by the Obama administration to impose martial law, confiscate firearms, invade red-state Texas or prepare for instituting 'total population control.' A report on Infowars, a website operated by Alex Jones, a libertarian-leaning talk radio host from Texas, suggested Helm was an acronym for Homeland Eradication of Local Militants."

Republican Gov. Greg Abbott "was criticized for giving legitimacy to conspiracy theorists when he ordered the Texas State Guard to monitor Jade Helm 15," Fernandez writes. Navy veteran Scott Degenaer, who questioned if Fernandez and photographer Tamir Kalifa were really from the Times or part of the military exercise, told Fernandez, “With Obama being in there with the way he’s already stomped all over the Constitution, pushing his presidential authority to the max, it would only be just the stroke of a pen for him to do away with that. This man is just totally anti-U.S. I mean, he just signed a deal with Iran.”
Written by Tim Mandell Posted at 7/17/2015 03:24:00 PM

And when no one takes their guns away, "Yeah! We kicked their butts through vigilance!"