Clinton visits Arkansas, mentions clean energy in a state that has to reduce emissions by 44.3%

Democratic presidential candidate Hillary Clinton visited Arkansas this weekend, briefly telling supporters, “We are not going back to denying climate change” and "said the country can move forward into a clean energy future powered by sources like wind, solar and advanced biofuels, creating 'millions of new, good jobs,'” Gary Digiuseppe reports for Agri-Pulse. A Democratic presidential candidate hasn't won in Arkansas since  Hillary's husband Bill Clinton, the former governor of Arkansas, took the state in 1996. Other than Bill Clinton, Arkansas hasn't voted in favor of a Democrat since Jimmy Carter in 1976.

Clinton failed to mention the coal industry in a state that has no coal mines and has been tasked with one of the largest reduction rates—percentage wise—of emissions under President Obama's plan to cut CO2 emissions by 30 percent by 2030 from existing power plants based on emission levels from 2005. The state's coal-fired power plants—which receive coal from Wyoming—supplied 53 percent of the state's electricity in 2013, and independent power producers provided more than 21 percent of net electricity, reports the U.S. Energy Information Administration.

Under the plan, Arkansas is required to cut emissions by 44.3 percent, the seventh highest percent in the U.S., reports Governing. Some of the states with the highest emissions—Kentucky, West Virginia and Wyoming—have to reduce rates by less than 20 percent. The Associated Press reported in April that the plan could cost Arkansas utilities more than $1 billion. (Governing map) 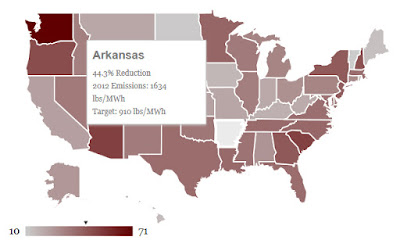