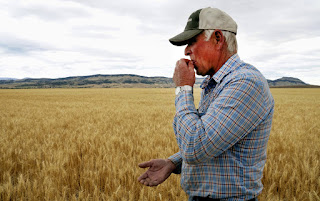 "Intense drought conditions have shrunk the kernels and disrupted the proteins of winter wheat crops in Montana, Washington, Oregon and Idaho, the region that produces a fifth of the U.S. harvest," Alison Noon reports for The Associated Press. On Monday, the "National Agricultural Statistics Service (NASS) classified a large percentage of the region’s winter wheat as below-average quality." (Noon photo: Rick Diehl chews kernels from his winter wheat fields in East Helena, Mont.)

"Texas, Oklahoma, Colorado, Kansas, Nebraska and South Dakota typically raise winter wheat of slightly lesser quality than the Northwest, according to data from the U.S. Department of Agriculture’s statistics arm," Noon writes. "But the Midwest is producing more 'good' bushels this year than its five-year average, while the Northwest’s 'good' ratings have dropped nearly 20 percent."

June temperatures in Idaho, Oregon and Washington were the highest on record, while Montana had three days in the 90s and 14 in the 80s, Noon writes. NASS Northwest Regional Director Chris Mertz told Noon, “I think earlier on some of the growers were more optimistic, but as the summer’s progressed, it’s gotten drier and drier as the harvest comes up. They’re still waiting to hear what happens when they run the combines out there to see how it’s going to be.”
Written by Tim Mandell Posted at 7/21/2015 03:02:00 PM