Four rural Michigan counties—Cass, Keweenaw, Lake and Oscoda—consistently fall below recommended ratios of primary care physicians to population, and seven other rural counties—most in the northern half of the Lower Peninsula—fall below suggested ratios in every primary care field it examined except family practice, says a report by the Citizens Research Council, Ted Roelofs reports for Bridge Magazine. 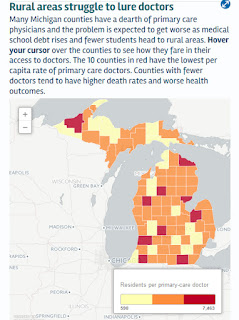 Help could be on the way, through a program from Michigan State University, Roelofs writes in a separate story. For more than 40 years, MSU has admitted 12 students each year to the College of Human Medicine Rural Physician Program, which sends medical students to rural areas in the Upper Peninsula. In 2012 the school launched the Rural Community Health Program, a similar program that sends six students to the Lower Peninsula. The first class graduated this year.

Program director Andrea Wendling told Roelofs, “Our goal by the time they graduate is that they have a really good understanding of what it would be like to practice in a rural community in Michigan." (Read more)
Written by Tim Mandell Posted at 7/22/2015 12:35:00 PM