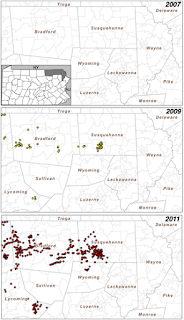 People living close to hydraulic fracturing operations in the Marcellus Shale region have higher rates of hospitalization for heart conditions, neurological illness and other conditions, says a study by University of Pennsylvania and Columbia University researchers published in the science journal PLOS One. (The increase of active wells in Pennsylvania's Bradford and Susquehanna Counties from 2007 to 2011)

Data was taken about more than 198,000 hospitalizations from 2007 to 2011 from Wayne, Bradford and Susquehanna counties in the northeastern part of the state, reports Penn Medicine. "Bradford and Susquehanna saw a significant increase in drilling activity over this time period, while the control county, Wayne, experienced no drilling activity due to a ban on drilling in that county because of its proximity to the Delaware River watershed."

Researchers examined "the top 25 specific medical categories for hospitalizations, as defined by the Pennsylvania Health Cost Containment Council, reports Penn Medicine. The study found "that cardiology and neurologic inpatient prevalence rates (the proportion of a population found to have been hospitalized per 100 residents per year) were significantly higher in areas closer to active wells, as determined by the proximity of wells to a person’s home and their density as defined by the number of active wells per square kilometer."

Researchers "found that 18 zip codes had a well density greater than 0.79 wells per square kilometer, and residents living in these zip codes were predicted to have a 27 percent increase in cardiology inpatient prevalence rates for each year this specific active well density existed compared to Wayne County residents where there is no drilling," reports Penn Medicine. (Read more)
Written by Tim Mandell Posted at 7/20/2015 02:35:00 PM